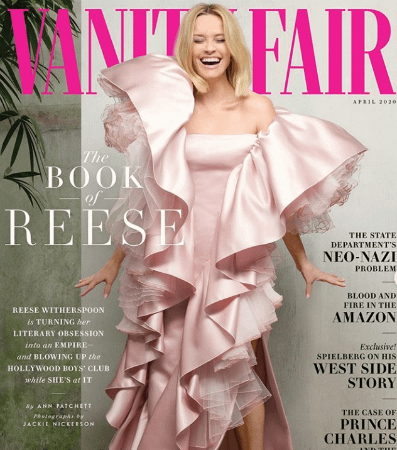 –Reese Witherspoon‘s Vanity Fair cover photo almost seems like an outtake — but I kind of love it. The actress said of the pic on Instagram: “When I first saw this cover, I thought, ‘Oh my goodness… what a goofball!’ But here I am captured, probably snort-laughing, in all my goofy glory!”

-In the interview, Reese talks about the #MeToo movement and what it was like as a child actor working with adults: “Bad things happened to me. I was assaulted, harassed. It wasn’t isolated. I recently had a journalist ask me about it. She said, Well, why didn’t you speak up sooner? And I thought, that’s so interesting to talk to someone who experienced those things and then judge them for the way they decide to speak about them. You tell your story in your own time when you’re ready.”

-During isolation, Miley Cyrus is hosting a “talk show” every day on Instagram Live and today’s guest was Demi Lovato.

–Jennifer Garner and Amy Adams have teamed up on Instagram to recruit celebs to read stories in support of children who are locked out of school.

-From offering safety and hand-washing tips to recommending which shows to binge watch, stars are flooding social media with tips to get through the crisis.

–John Legend did a #TogetherAtHome concert on Instagram Live today, and announced the other musicians set to perform via livestream include Miguel, Jhené Aiko, Shawn Mendes & Camila Cabello and Charlie Puth.

–Vanessa Hudgens is walking back the comments she made on an Instagram Live yesterday, saying they were “taken out of context.” She had said: “Um, yeah, ’til July sounds like a bunch of bulls–t. I’m sorry, but like, it’s a virus, I get it, like, I respect it, but at the same time I’m like, even if everybody gets it, like yeah, people are going to die, which is terrible but like, inevitable?”

–Emma Stone has reportedly had to postpone her wedding, which was supposed to take place this weekend in LA.

-Everything about this crisis is terrible — except for this story: Jared Leto says he just came back from 12 days in silent meditation in the desert and had no idea what was happening.  Way to stay on brand, bud.

–Tom Cruise is back to shooting the new Mission Impossible movie, social distancing be damned.

–Jodie Turner-Smith and Joshua Jackson are my favourite celebrity couple and this just kicked it to a whole new level.

-Birds of Prey is the next big movie being released early on video on demand. Keep it coming, Hollywood!

–Dylan Sprouse stars in the Banana Split trailer, about two girls who bond when one stars dating the other’s ex.