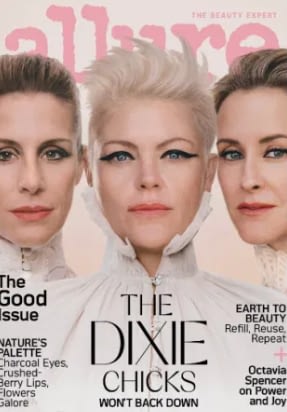 -The Dixie Chicks are on the cover of Allure, in which they talk about how speaking out against the U.S.-led invasion of Iraq during a 2003 concert basically killed their career for more than a decade. “I have no regrets, but the responsible part of me doesn’t want to put people through shit [again]. When I think back, it’s like that movie Sliding Doors, right? Where would we be today if I hadn’t said that? That’s interesting. I really don’t know if I would take it back,” says Natalie Maines.

-Wow wow wow. The SXSW festival in Austin has been canceled over coronavirus concerns.

-Following yesterday’s staff walkout, Hachette Book Group has announced that it will not publish Woody Allen’s memoir, originally scheduled for sale in April 2020, and will return all rights to the author.

-Knives Out star Ana de Armas was spotted hanging out with Ben Affleck in Havana yesterday. I don’t want this for her.

-At least five men say they were catfished by Drag Race contestant Joey Gugliemelli (aka Sherry Pie), who posed as a casting director and led them to submit embarrassing audition tapes of themselves saying and doing degrading things. One of the young men said he even agreed to masturbate on camera as part of the audition process. Gugliemelli posted on Facebook: “I want to start by saying how sorry I am that I caused such trauma and pain and how horribly embarrassed and disgusted I am with myself. I know that the pain and hurt that I have caused will never go away and I know that what I did was wrong and truly cruel.”

-Oh boy, fans of Grey’s Anatomy do NOT seem happy with the way the show wrote off Alex Karev last night. The actor didn’t appear in any scenes but did some voiceovers reading letters his character sent which explained that he ***SPOILER ALERT: left to reunite with Katherine Heigl’s character Izzie, who was raising his kids that he didn’t know about.****  Beyond a few outliers, the response on Twitter seems decidedly unhappy.

-The Hype House kids not knowing who Perez Hilton is tickles me.

–Johnny Depp’s defamation trial against The Sun publisher is about to begin, and the judge has ordered him to turn over audio recordings and papers from his divorce proceeding with Amber Heard, so expect a lot of sad details of their stormy relationship to surface.

–Tom Hanks plays a US Navy skipper who must lead an Allied convoy being stalked by Nazi U-boats in the Greyhound trailer.