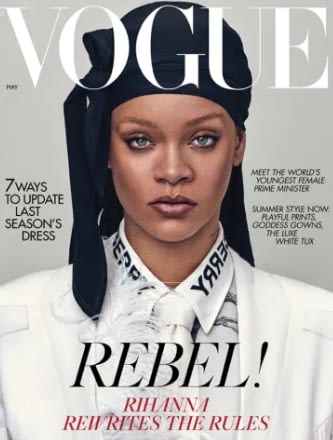 –Rihanna on British Vogue is what the world needs right now. In the interview, she promises that she is “very aggressively working on new music,” says she gets anxiety before public appearances (“Oh, I’m nervous before even getting in the car to go to something. It can be devastating. And when I pull up to the red carpet, I’m like ‘Are you kidding me?’ I left the Grammys one time. Left! In the middle of my hair and make-up. My hair half up, half of my lash on”), and reveals she’s very involved in Fenty Beauty (“I write all of the copy for the websites, the product descriptions, product names, the colour names. I do have a huge team, but I just don’t necessarily think their tone is mine. I’d feel like a fraud selling something that I can’t stand by”).

-This is making so many people so happy right now: Christopher Meloni is bringing his Law & Order: SVU character back to television. The actor will return as Elliot Stabler in a new, yet untitled NBC series centered around his character that hails from L&O mastermind Dick Wolf.

-The best thing about all the late night hosts doing at-home shows is that now we can judge all of their houses.

-I don’t know why I’m surprised that Gwyneth Paltrow watched Tiger King, but here I am.

–Daniel Radcliffe and Erin Darke talk about being the first celebrities to get hit with a coronavirus hoax. They seems super sweet together.

-Veronica Mars’ Ryan Hansen posted a video of him singing happy birthday for costar Jason Dohring. The best bit: “Feel free to comment below about how much you love Jason, happy birthday, all that stuff. If it’s about the show, email me. We can talk about it there. wedidnotwriteit@actor.com.” Man, that poor cast must have been bombarded with complaints after the final episode.

-I like this piece on how entertainment publicists are handling PR in the middle of a global crisis.

–Aisha Tyler just released a trailer for a comedy short she did with Stephen Amell.

-The kid who plays Mike on Stranger Things is stirring up gossip and I love it.

–Lindsay Lohan has declared she’s “back.” From what is unclear but…yay?

-I don’t know how the NYT is standing by its gushing article of the Internet Archive. Yes, it’s made more than a million books available free online. But it’s doing so by breaking copyright and not paying the authors. NPR also wrote a glowing article on it last week, which they ended up stepping back from after authors called out the site for piracy.

-I definitely agree with this take on how Annie Murphy will be Schitt’s Creek’s greatest legacy. The premise of her next show sounds great so I’m hoping for big things for her.

–Keri Russell and Matthew Rhys reading a children’s book is all kinds of cute.

-Here’s the trailer for Jennifer Lopez’s charitable new reality series on Quibi Thanks A Million, in which 10 celebs each give away $100k to deserving recipients.

-The one (only?) good thing about being stuck in our houses is that there are lots of new shows premiering in April with big stars, including Chris Evans, Cate Blanchett, Sophie Turner, Rashida Jones and Liam Hemsworth.

-Also premiering in April is Normal People, based on the Sally Rooney book that everyone seemed to fall in love with in 2018. Here’s the trailer: