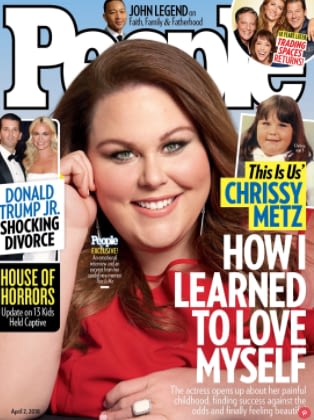 -In her new People cover, Chrissy Metz talks about her terrible stepfather, who hit her and mocked her weight.

–Cardi B’s Cosmo cover interview addresses the Me Too movement in hip hop. “A lot of video vixens have spoke about this and nobody gives a f-ck…I bet if one of these women stands up and talks about it, people are going to say, ‘So what? You’re a ho. It don’t matter.'” She also reveals why she keeps talking about her stripper past: “People say, ‘Why do you always got to say that you used to be a stripper? We get it.’ Because y’all don’t respect me because of it, and y’all going to respect these strippers from now on.”

-I always love the power stylist issueof THR. I especially found the roundtablefascinating, in which they talk about the challenge of dressing their clients in black for Time’s Up, and how they usually lose money during awards season.

-Meanwhile, Drew Barrymore is endorsing Crocs and it kinda works?

-I gave up on The Americans last year because it was starting to feel like a slog, but I’ll probably tune into the final season. This absolutely delightful interview with Keri Russell and Matthew Rhyshelps. (I love the part when the interviewer says he doesn’t want to hear spoilers. “Well, we’re going to tell you!” Russell shouts. “Henry dies!” Rhys shouts, a little louder.)

-Oooh boy. A writer on The Vampire Diaries shared her horrifying storyof being harassed by a director on the set. For some reason, a lot of people on my Twitter TL don’t seem to like that show’s creator, but I love the fact that as soon as she heard what happened she said “It is not your job to take abuse or accept unacceptable behavior because you’re young and a woman. That is not your job.” Also, according to this tweet, the guy has gone on to direct Arrow, Gotham, and Lethal Weapon.

-This Mads Mikkelsen quote about starring in a Beyonce video is perfection. I saw him two years ago at TIFF and though I hated his movie, the Q&A with him afterwards totally made up for it.

-Why is it news that Jennifer Aniston and Justin Theroux have barely spoken since they split? That’s what “split” means.

–Millie Bobby Brown and Gaten Matarazzotweeted their support after a kid threw a Stranger Things-themed birthday party and no one showed up.

–This trailer for a short film starring Stephen Amell looks like a Canadian version The Florida Project (and I mean that in a good way).

–Gillian Anderson being unable to figure out how her watergun works to get back at David Duchovny is the cutest thing ever.

-This is a good reviewof Jack White‘s new album, which is reportedly not good.

-Netflix is adapting the YA novel To All the Boys I’ve Loved Before, which I adored.

–Tessa Thompson makes a cameo as a personal trainer in Portlandia’s series finale.

-Also, she’s super into the Twitter feed that compares her to goats.

-Speaking of endings, I don’t watch Once Upon a Time, but it’s sweet that original stars Jennifer Morrison, Ginnifer Goodwin, Josh Dallas and Emilie DeRavin all agreed to return for the series finale.