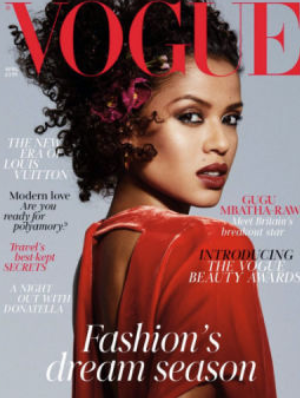 -I’m a little bit in love with Gugu Mbatha-Raw’s cover of British Vogue.

-I’m not sure I’m in invested in any TV show like I’m invested in the #ScaringScoty clips on Will Smith’s Instagram.

-Between Adam Rippon saying he “was sleeping on Shawn Mendes” and Katy Perry saying “wig” on American Idol, it’s been a really good wig for stan Twitter terminology.

-I still think it’s weird that an orthodontist was writing Tumblr posts shaming his 17-year-old patient, but good on Michael B Jordan for trying to make her feel better.

–Usher and his wife, Grace Miguel, are splitting up after two years of marriage and almost 10 years together.

-Transparent will not return in 2018. It is unclear how much the new episodes will have to be rewritten and if Amazon plans to recast Jeffrey Tambor’s character.

-Awww: Mandy Moore and Milo Ventimiglia have watched every episode except one of This Is Us together.

–Hilarie Burton and Jeffrey Dean Morgan had a baby! I always forget they’re together.

–Tiffany Haddish and Frances McDormand sticking their tongues out at each other is everything.

-So last night’s Bachelor special made everything even worse? I don’t watch it but it’s all anyone in my office can talk about right now.

–Noah Wyle is heading to CBS in a racial drama from Ava DuVernay and  Greg Berlanti.

-I keep hearing that the first 5 episodes of Jessica Jones that were made available to critics are not as good as last year, and it bums me out.  I’m still going to binge an unhealthy amount of episodes this weekend.

-This interview with someone who was at the Wrinkle in Time screening that was interrupted by Jimmy Kimmel and a bunch of stars during the Oscars is a hoot. “I kind of like get up next to [Lin-Manuel Miranda] and I’m like, can I be here? And he’s like, ‘Yeah, totally you can be here, have some Sour Patch kids?’ and I’m like, your taste in candy is immaculate, my friend.”

-This is an interesting piece on how Jane the Virgin is not a guilty pleasure. I listened to Gina Rodriguez‘s episode of the WTF podcast a few weeks ago (which was delightful!) but I was shocked to hear her describe it like that.

-Holy moly, the Lost in Space trailer is gorg.

–Saoirse Ronan, Elisabeth Moss and Annette Benning star in the Seagull trailer. “I’m in mourning… for my life” is my new line.