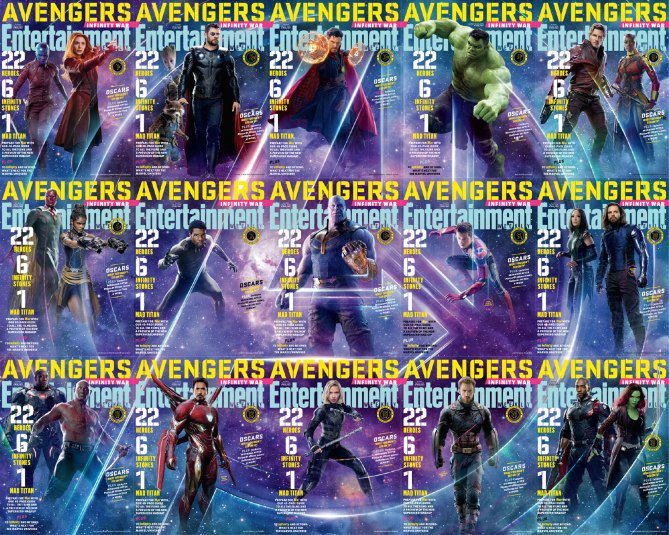 -EW released 15(!) different covers this week for Avengers: Infinity War. I haven’t checked by mail yet but I’m hoping for Evans, will undoubtedly get Thanos. Also, look at Shuri!

-Wait a second… just how many dinosaur skulls does Leonardo DiCaprio own?

-More proof that A-listers need to demand inclusion riders. On A Few Good Men, an executive wanted a sex scene between Tom Cruise and Demi Moore. When Aaron Sorkin refused, the exec responded:  “Well if Tom and Demi aren’t going to sleep together why is Demi’s [character] a woman?”

-Time’s up? A source within the New York Police Department revealed to the Daily Beast that they are close to arresting Harvey Weinstein.

–Mae Whitman talking about the Zeek junkyard speech that Craig T. Nelson improvised on Parenthood made me tear up a lil bit.

–Olivia Munn says that she is not dating Justin Theroux — or any of her friends’ exes.

-It sucks that people are blaming Ellen Pompeo‘s recently salary bump on two of her Grey’s costars leaving. That’s not how TV works. Trust me, if the show wanted to keep those actors, Disney can afford it.

–Lisa Bonet has broken her silence about Bill Cosby – in the most Lisa Bonet-y way possible. “There was no knowledge on my part about his specific actions, but…there was just energy. And that type of sinister, shadow energy cannot be concealed.”

-It’s unusual to get gossip about the usually private Colin Firth, but his wife admitted to an affair when she and Firth were on a break. She is now accusing the man she was with of stalking.

-I don’t get this Bruno Mars debate. The man works his butt off, seems nice and non-problematic, and makes BOPS.

–Taylor Swift and Joe Alwyn went hiking in Malibu this week, leading to this gem of an eyewitness statement: “The other thing that struck me is that they kind of look exactly like each other, which is weird.”

–Kristen Wiig has been confirmed as Wonder Woman 2’s villain Cheetah. This is casting I can get behind.

-I really liked this take on Atlanta’s latest episode, especially the part about “Donald Glover‘s star image as a black creative able to balance autonomy and a so-called auteurism with wider recognition.”

-This is my city’s tribute to The Shape of Water. I’m very proud.