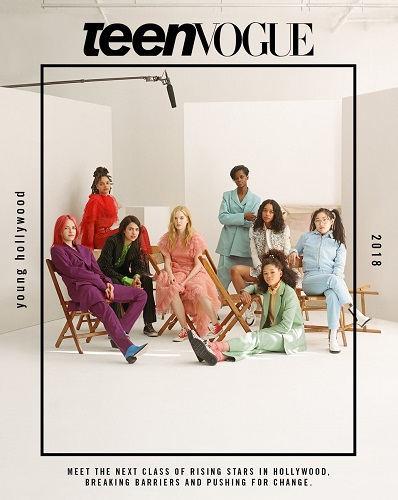 -The fact that I had to look up almost half of the people featured on Teen Vogue’s Young Hollywood Class of 2018 issue means I’m very, very old.

-On Colbert’s show last night, Donald Glover met the Girl Scout who used “Red Bone” to sell cookies and it was adorable.

-Man, Amy Schumer is sharing *a lot* about her wedding on social media. The dress still pains me, but this video of the wedding vows is very sweet. (I love the part where, after he pours his heart out in an emotional speech, she just mouths “f*ck.”)

-This thread about people freaking out when meeting someone famous made me smile.

-Speaking of things that made me smile today, there’s also this Funny or Die skit with Bradley Whitford playing an “emotional stuntman” who gets called in when actors can’t handle crying scenes. (“They’re not takes. They’re gifts.”)

-I can’t believe it took four days after that horrific CBC report for Hedley to finally announce they’ll be taking an “indefinite hiatus.”

-E! is reportedly holding Oscar red carpet prep “crisis meetings” in an attempt to have only “friendly” stars approach Ryan Seacrest to talk to live, according to Page Six. “There will be no Debra Messing moments this time around,” said a source.

-On their show today, Kelly Ripa  defended co-host Seacrest  without actually mentioning the assault allegations by saying, “I just want you to know that you are a privilege to work with and I adore you. I’m speaking on behalf of all of us here. I know what an easy, professional, great person you are, and I feel very very lucky to work with you each and every day.”

-Meanwhile,  Jimmy Kimmel says he has no plans to address the Me Too movement when he hosts the Oscars, saying “This show is not about reliving people’s sexual assaults.”

-There’s also lots of talk on Twitter that more stories about really powerful men in Hollywood are about to be published, including one about a TV “titan.”

–Quentin Tarantino‘s Sharon Tate movie is reportedly going ahead, and will star Brad Pitt and Leonardo DiCaprio. No word on who will play Tate, despite the fact that she’s ostensibly who the movie is about…

-I really liked this interview with John Leguizamo, in which he talks about Latino representation in Hollywood.

-I stopped watching Brooklyn Nine-Nine but I might have to start again now that Gina Rodriguez has joined the cast and might be playing Rosa’s girlfriend.

-I also gave up on Scandal ages ago but the cast’s appearance on Ellen this week was very cute.

-The police were reportedly called to Tori Spelling’s house over a “domestic incident.”

-In a very, very clever Twitter exchange between Robert Downey Jr. and Marvel, the movie studio announced that Avengers: Infinity War’s release date would be pushed up a week to April 27 instead of May 4. It’s smart of Disney to move it further away from the release of it’s other big movie (Solo), as well as Deadpool 2.

–Kristen Wiig is in talks to play the villain in Wonder Woman 2, which I kind of love.

-Here’s the trailer for Starz’ series SweetBitter. I really, really liked that book, which followed a new waitress training at one of NYC’s hottest restaurants.

–Alicia Vikander and James McAvoy play lovers separated by a hostage taking (and a submarine) in the Submergence trailer.