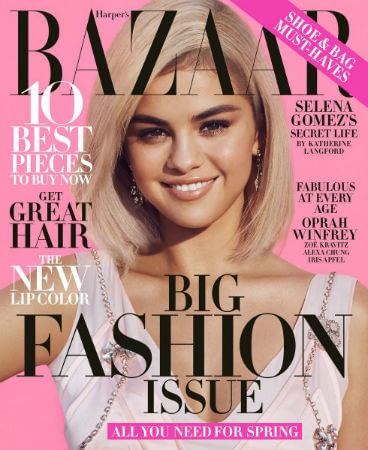 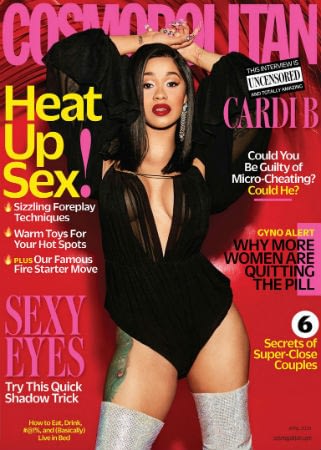 -I love a good Cardi B interview, and her latest is shaping up to be a gem! In the preview quotes from her new Cosmo cover, she sticks up for strippers (“Just because somebody was a stripper don’t mean they don’t have no brain”) and explains why she’s sticking with fiance Offset amid cheating rumours (“I don’t have low self-esteem…I know I look good. I know I’m rich, I know I’m talented. I know I could get any man I want —any basketball player, football player. But I want to work out my shit with my man, and I don’t got to explain why. I’m not your property”).

-Speaking of cover stories, lots of people have pointed out that Variety’s new Jennifer Lawrence cover looks a lot like THR’s cover shot of her from a couple of months ago.

-A lot of people have also pointed out that her Variety interview is pretty bland, including Buzzfeed writer Anne Helen Peterson — who Armie Hammer immediately mocked via Twitter.  His post-Oscar nominations attitude (which has included a tracksuit obsession), coupled with his dedication to going after a female entertainment journalist who dared write a non-super-flattering article about him is doing nothing to get me on his side. If anything, it’s proving the article’s point!

-The Variety story may have been a let down, but Jennifer Lawrence‘s off-the-cut, freewheeling appearance on Stephen Colbert’s show was a delight.  She drank rum, called Harvey Weinstein an “ass boil,” and revealed that she spent most of Amy Schumer’s wedding trying to flirt with Larry David.

–Uma Thurman does not regret speaking out about Weinstein. “You’ve gotta be a citizen, and you can’t leave people alone holding the bag of truth by themselves. There’s no one I wish to get due process more than him.”

–Ryan Seacrest denies his former stylist’s sexual assault allegations, calling her claims “debunked“.  It’s going to be incredibly interesting to see if anyone calls him out on the carpet.

-Well, at least Sarah Jessica Parker and Cynthia Nixon still seem to get along.

–Mel B hinted that the Spice Girls reunion might happen at Prince Harry and Meghan Markle’s wedding.

-It’s really, really weird that the social media embargo for A Wrinkle In Time lifted last night — and no one is really saying anything. There are a few mixed reactions, but it seems like most outlets were told to not say anything until next week? Not a great sign, especially because Disney put a full review embargo on it until 1 day and 7 hours before it opens. I’m still gonna see it, regardless.

-Not gonna lie; Michael B. Jordan talking about Wallace’s death scene on The Wire made me tear up a little.

-Of course Barbra Streisand had her beloved dog cloned.

-Weird — the promos of Kelly Clarkson on The Voice make me want to watch the show. And I am not someone who’s inclined to do that.

–Taylor Kitsch may be giving Will Smith a run for his money as the most charming actor on Instagram.

-Holy crap. Netflix spends more on content than anyone else on the internet — and many TV networks, too. It’s eyeing 700(!) original series and movies in 2018.

–Gina Rodriguez has signed on to star in and produce a romantic comedy that the creator of MTV’s Sweet/Vicious is directing for Netflix.

-I like that Yvette Nicole Brown keeps getting work. Now that The Mayor is cancelled, she’s been tapped to star in Most Likely To, written by Diablo Cody and produced by Greg Berlanti.

–Adam Sandler and Chris Rock oversee a chaotic wedding in The Week Of trailer.

-There’s going to be a Kardashians vs Jenner episode of Family Feud, featuring Kanye West. Survey says: I don’t care.

-This oral history of the envelope mix up at last year’s Oscars is so, so good. (It’s worth clicking on just for the photo alone.) Busy Phillips reaction was the best: “I’m like, “I’m sitting next to Ben Affleck — he can stop the show because he’s fucking Batman!” I kind of grabbed his arm — we’re not friends, but I was like, ‘You have to do something! Do something!'”

-I really appreciate this detailed timeline of Janelle Monáe and Tessa Thompson’s relationship.

–Jennifer Lawrence  did not get Phantom Thread. “I got through about three minutes of it. I put in a good solid three. I’m sorry to anybody who loved that movie. I couldn’t give that kind of time. It was three minutes and I was just [oof].” Funny, that was most people’s reaction to mother! last year.

–Kevin Smith tweeted from his hospital bed after suffering massive heart attack. (And for some stupid reason, people are outraged that Chris Pratt offered him prayers?)

-This New Yorker profile on Donald Glover is fascinating and yet also re-affirms my belief that I would find talking to him to be an incredibly frustrating experience.

-After the crazy horrifying new allegations against Hedley that surfaced this weekend, I do not understand how they are still performing this week. I do not.

–Ryan Seacrest‘s E! stylist details her abuse allegations against him in a new Variety article, in which she claims years of unwanted sexual aggression. It’s pretty damning — and it came out days before he’ll hit the red carpet at the Oscars.

-The Weinstein Company’s board of representatives have decided to file for bankruptcy this week after a deal to sell the company fell through.

–Heather Locklear was arrested for felony domestic violence against her boyfriend and three counts of misdemeanor battery on a police officer.

-Did Mary Elizabeth Winstead break up with Ewan McGregor because she didn’t want to be called a “homewrecker” anymore?  Apparently not.

-Meanwhile, as predicted following Paramount’s bungled rolling out of it, Annihilation flopped.

-Remember when fall used to be the busiest TV season, and March was kind of dead following Feb sweeps? Now that the Olympics are over, 53(!) shows resume their seasons this week, plus 6 season premieres and 3 series premieres. (AND the Oscars are this weekend.)

-Video of Tom Holland visiting kids in hospitals dressed like Spider Man is all kinds of wonderful.

–Alicia Silverstone and her husband Christopher Jarecki have separated after 20 years together.

–Michael B Jordan is ready to burn all your books in the trailer for HBO’s Fahrenheit 451.