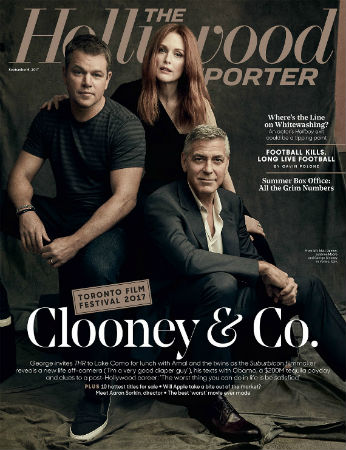 -I didn’t post about George Clooney’s THR cover story yesterday because I needed time to process it. This was a much more intimate look into his life than we’re used to (he invited the reporter to his Lake Como home for lunch and dinner, where he introduced him to Amal and the kids). They talk about his proposal (“I had a playlist with my Rosemary [Clooney] songs on and I was waiting for this song, ‘Why Shouldn’t I?'”), changing diapers (“I’m a very good diaper guy, which I didn’t know I would be”), playing basketball with Obama, how he bought his Lake Como house (he and Rande Gerber‘s motorcycles broke down in Italy and they were taken in by the homeowner), and his $200M tequila payday. Interestingly, he talks a lot about politics and racism and it feels like…positioning? I always believed him when he’s said in the past that he has no interest in a political career, but now I’m not so sure.

–Taylor Swift kicks Andy Samberg through a wall and eats food off her shirt in an AT&T commercial.

-I like this article questioning why Kate Bosworth still gets invited to red carpets? (I’d ask the same of Jessica Alba.)

-All of W’s October covers are soo good! (Special shout-out to Chris Hemsworth for that chest, tho.)

-Has Hollywood gotten so bad with coming up with new ideas that they’ve resorted to stealing from Entourage plots?

-Any day we get not one, but two new Kelly Clarkson songs is a good day!

-I don’t really know much about Dylan O’Brien, but Vulture’s profile on how he had to fight to reclaim his career after a brutal accident is a great read.

-Also a great read: this piece about why Louis CK needs to break his silence on those assault rumours.

-Wow, the reviews for Top of the Lake: China Girl are so not good. Like, as in mentions of True Detective season 2 not good.

-I love my stupid superhero shows (as proven by my fangirling to the casts last weekend), but there is no show less equipped to take on an episode about Black Lives Matter than Arrow. Just don’t do it, guys.

–Robert Pattinson‘s story of his first kiss is adorably awkward.

The 2013 Kardashian Christmas Card Has Landed!

Here’s the First Footage From The X-Files Reboot