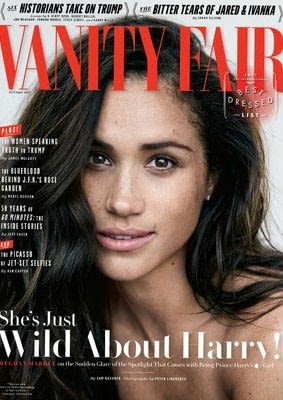 –Megan Markle and Prince Harry made it Vanity Fair official, which is even better than Instagram official. Her gorgeous new cover features a lot of Suits talk (ugh, really?) but she does offer a lot of good relationship tidbits. She talks about dealing with the sudden scrutiny (“We were very quietly dating for about six months before it became news, and I was working during that whole time, and the only thing that changed was people’s perception. Nothing about me changed. I’m still the same person that I am, and I’ve never defined myself by my relationship”) and seems to set a timeline about when we’re going to get more info about them — and maybe a big announcement? (“We’re a couple. We’re in love. I’m sure there will be a time when we will have to come forward and present ourselves and have stories to tell, but I hope what people will understand is that this is our time. This is for us.”). It’s all very, very well done.

–George and Amal Clooney made a triumphant return to the red carpet in Venice,  where he talked about his twins’ different personalities.

-It’s a big week for Kate Middleton news. She announced her pregnancy, and she was awarded $119,000 in punitive damages for topless photos published in a French magazine.

–Chris Evans reunited with his dog after 10 weeks and it was amazing.

–Taylor Swift debuted a new song over the weekend, “Ready for It.” People say she’s copying Kanye, which seems like a bit of a stretch. In any case, this song is way better than the last.

–Madonna is too famous to get packages delivered to her.