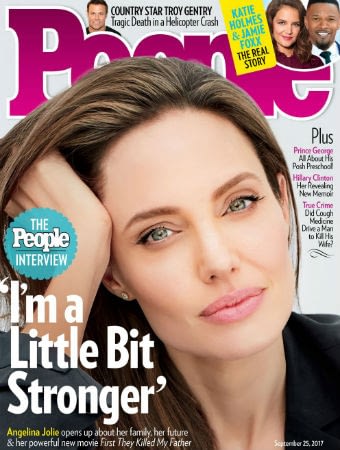 –Angelina Jolie is selling her new movie hard (probably even harder now that the reviews following its TIFF premiere have been decidedly mixed). In a new People cover story, she spoke about the “difficult” year she’s had and revealed that she’s “a little bit stronger,” and that her family is now out of “lockdown.”

-16-year-old Maddox was also interviewed. I guess that’s what happens when you make your kid an exec producer of your movie.

–Rebel Wilson has been awarded record-breaking $3.6 million in that defamation suit. She says she plans to “give the money away.”

-THR did a deep-dive into This Is Us, which returns Sept 26. The article is great, but even greater is this photo.

–Harrison Ford is interviewed in the latest issue of GQ, and this part where he explains how he punched Ryan Gosling must be read.

–Demi Lovato may possibly be dating a girl. Here for it.

–Amber Tamblyn continues to drag James Woods, this time by penning an open letter to him in Teen Vogue. God, I love her.

-During a rapid-fire segment of an interview, Kate Hudson said the ‘laziest’ thing she’s ever done is have a C-section, so of course the torches came out on social media.

–Maggie Gyllenhaal doesn’t know anything about the scarf Taylor Swift says she left at her house and she wants y’all to stop asking about it.

–Prince Harry and Meghan Markle continue to inch closer to an engagement. He’s reportedly introduced her to the Queen.

-Out of all the shows that were competing in EW’s fall TV cover battle, I didn’t think Riverdale would be the one to come out on top. What do I know?  Meanwhile, here’s the trailer for season 2.

–Carey Mulligan showed up at TIFF looking very not-pregnant, so she must have had her second kid recently.

–Idris Elba is so over all those questions about possibly playing Bond. (“Can we not? Because it feels like I’m campaigning, and I’m not. At first it was harmless — oh, I know, wouldn’t it be great? — and now it’s started off racial debates. I’m probably the most famous Bond actor in the world, and I’ve not even played the role. Enough is enough. I can’t talk about it any more.”)

–Tyrese is publicly feuding with The Rock via Instagram comments. This will not end well for him.

–Josh Brolin, Miles Teller and Taylor Kitsch play firefighters in the trailer for Only the Brave.