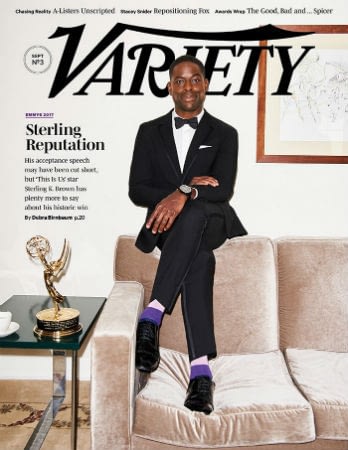 -In Variety’s Emmy’s morning-after interview, This Is Us star Sterling K Brown opens up about his historic win. He also revealed that his naked butt was cut out of his new movie with Kate Hudson. Boo-urns, Hollywood!

-For THR’s fashion issue, celebrities talk about the first time they met their fave designer. I don’t know why Jen Meyers is practically sitting in Jennifer Aniston’s lap, though.

-The woman in Kevin Hart‘s sex tape is denying any involvement in the alleged extortion plot.

-The best part of the Gossip Girl 10-year anniversary is all of the think pieces. I will read them all! Every. Single. One.

-Following those photos of Gina Torres kissing another man, she and Laurence Fishburne have announced their split after 14 years of marriage. Gina is a BAMF and I just want her to be happy.

-Speaking of splits, there are rumours that Rachel Bilson and Hayden Christensen may have broken up after 9 years of marriage.

-The Good Place returns tonight, and it’s one of the few shows I’m actually looking forward to this TV season. Kristen Bell‘s video of her castmates finding out about last year’s shocking twist is perfect.

-It’s DVD season, which means it’s gag reel season! Here are the ones from Arrow,  Timeless,  Criminal Minds, Supernatural and The Flash.

–Daniel Dae Kim and Ed Skrein are fighting Hollywood whitewashing one Instagram pic at a time.

-This is an interesting look at why award season bait like Hostiles and Disobedience are still without deals after TIFF.  The festival’s late/delayed screening times and issues with attendance reports didn’t help.

-Add Sean Penn to the list of film stars turning to the small screen. (As @ira says, keep it.)

-The Honest Trailer for Wonder Woman is kind of perfect, guy.

-After bringing you Sexy Archie, the CW is developing a dark horror take on Sabrina the Teenage Witch. Yeah, I’m in.

-A lucky fan got to get her makeup done by Rihanna at Fenty’s London launch.

-I’m kind of done with Netflix’s Marvel shows (with the exception of Jessica Jones and The Runaways), but the first trailer for The Punisher is mighty intriguing.

-Here’s the first trailer for Alicia Vikander as Tomb Raider. I envy her triceps.