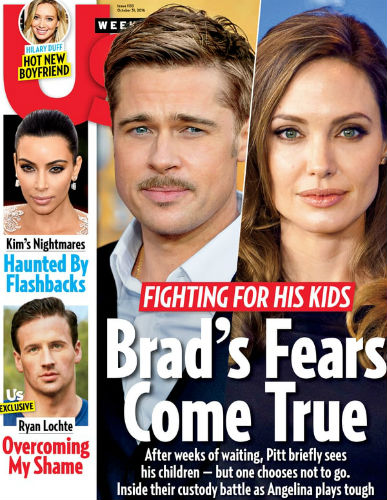 -According to Us Weekly, 15-year-old Maddox refused to attend Brad Pitt’s first meeting with the kids since the split, instead opting to stay with Angelina Jolie. E! News seems to be confirming the story, saying that Pitt has now seen the kids twice but Maddox “is mad at his dad and doesn’t want to see him now.”

–Tom Cruise acted out his entire film history in a 9-minute segment with James Corden last night. He looks genuinely nervous at the beginning, which is kind of freaking me out. Tom Cruise feels human emotions?!

-Meanwhile, Cruise has sent Dakota Fanning a birthday gift every single year for the past 10 years.

-According to People, Jennifer Lawrence and director Darren Aronofsky really are dating. Huh.

–Ciara has dropped that $15 million defamation lawsuit against Future because, according to TMZ, she’s doing too well to claim he hurt her career.

-The Television Academy would like to remind Donald Trump that the Emmys aren’t rigged.

-I actually really like the actress who’s playing Ichabod’s new partner on Sleepy Hollow, but there’s no way that show can win back viewers.

–Jude Law’s The Young Pope got a second season before even premiering on American TV. This show looks batshit crazy and I can’t wait.

-This Joss Whedon interview is great, right up until the very last answer when he says “I’m a Buffy/Spike shipper.” I…I need to sit down.

-This is an interesting interview with Ryan Reynolds on how he became so involved in Deadpool’s marketing. He was even cold-calling companies about product placements!

–Rachel McAdams helped This Is Us’ Justin Hartley strip down on Ellen. I like her life.

-Also, Rachel revealed that her costar Benedict Cumberbatch likes his fans, but wishes they’d come up with a less ridiculous name for themselves.

-This is some Laura Ashley madness on Alicia Vikander.

-Goodness, I really like Crazy Ex-Girlfriend’s Rachel Bloom and how open she is about her depression.

-Is there trouble in paradise between Kanye West and Jay Z?

-The Logan trailer is pretty damn good (though Hollywood needs to implement a moratorium on using Johnny Cash‘s “Hurt” in trailers). I’m really hoping this is finally the Wolverine movie Hugh Jackman deserves.