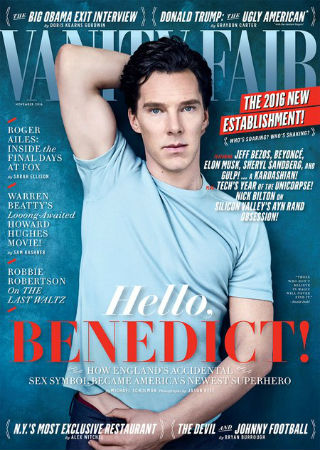 -Everyone’s freaking out about how “hot” Benedict Cumberbatch is on the new cover of Vanity Fair. Really? It’s not doing anything for me. First of all, that’s the cheating pose. There’s no way a guy doesn’t look hot when posing with his arm above his head like that. It’s not a fair and accurate representation of hotness. And why is he pulling his pants down? I’m uncomfortable.

-Meanwhile, it looks like his Doctor Strange costar Tilda Swinton is left to shoulder all the whitewashing response.

-TMZ reports that the Kardashian family suspects the robbery was an inside job, with someone who knew when Kim would be bodyguardless tipping off the crooks.

-Not surprisingly, Karl Lagerfeld had some questionable things to say about the Kim Kardashian robbery. Because he’s the human equivalent of a pinky ring.

-I always forget that Melissa Etheridge is tight with Brad Pitt, but she doesn’t let us forget it in her new interview with Andy Cohen. Us Weekly reports she commented on the Brangelina split, talking about Angelina‘s strategy (“”I’ve gone through family courts. I’ve been twice around this block, and I know it really well, and I know when there’s some forethought to just how mean and just how you’re going to put disinformation out there first”) and reminding us all about that time when Angelina broke up Billy Bob Thorton and Laura Dern (“I was around when Angelina was not doing nice things with Billy Bob to Laura Dern. I went through that on a personal level…I helped Laura move out of her house with Billy Bob — I like broke into their home to get their stuff out because it was so nasty.”

-Perhaps maybe Chrissy Teigen shouldn’t have admitted to opening Rihanna’s mail? Seeing as that’s illegal and all. Just a thought.

-The Flash cast is really getting into the playoff season. Well, until you get to the end.

-Speaking of The Flash, I agree with this article on the 10 ways to fix the show.

-This little promo for Martha Stewart and Snoop’s new show already makes this my favourite thing on TV by a country mile.

-Variety’s report on what TV stars make per episode is fascinating! First of all, no wonder the Supernatural boys never want that show to end. Jensen Ackles is pulling in $175K per ep. And look at the women ruling the charts! Lauren Graham and Alexis Bledel both scored $750K per episode of the revival, while Clare Danes and Ellen Pompeo are in the $400-450k range.

–Ben Stiller revealed he was diagnosed with prostate cancer 2 years ago.

-When it comes to Taylor Swift, Demi Lovato is on Team Katy Perry.

-The Birth of a Nation is tracking low. It hasn’t been helped by Nate Parker‘s belligerent appearances this week, or this New Yorker article about how the movie isn’t worth defending.

-Congrats to OITNB and You’re The Worst star Samira Wiley, who just got engaged.

-I’m not totally sold on Kristen Stewart’s suit, but damn that hair. DAYUM!

–Emily Blunt says that when they were shooting The Girl on the Train, the extras assumed it was a Friends reunion show.

-Meanwhile, the reviews for that movie are so bad. Bummer.

-Oh wow, an arrest was made after that death at George Stroumboulopoulos‘ L.A. home. The way it was initially covered, I just assumed it was a suicide.

-Congrats to Girls star Zosia Mamet, who married longtime BF Evan Jonigkeit. (Who, I just found out, is NOT Toby from Pretty Little Liars. Huh).

-Pretty much every celebrity ever is in this voting PSA. Like, every one.