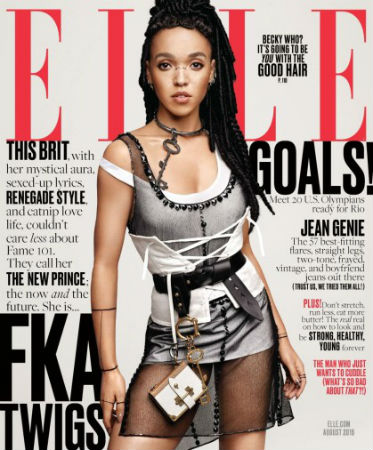 -Frankly, when I first saw this cover I was trying to figure out why they put FKA Twigs in that messy outfit instead of looking at the headlines surrounding her, but yeah, that Becky with the Good Hair joke is not great. Elle even published an article on their site from Melissa Harris-Perry about why it alarmed her.

-In an Instagram post, Lady Gaga says she and Taylor Kinney are soulmates who are just taking a break, and asked her fans to “please root us on.”

–Idris Elba dancing and singing in funny voices is making my insides goopy.

-I was interviewed by the Toronto Star and I praised Kim Kardashian. In print. Publicly. I don’t even know who I am anymore…

–Mila Kunis says she and Ashton Kutcher tried to just be f*** buddies but, like their crappy rom-coms suggest, that never works. “If we just paid attention to these movies [No Strings Attached and Friends with Benefits], we should know that s—t like this does not work out in real life.”

–Kevin Bacon on Comedy Bang Bang made me laugh a lot. (“In Kevintown, the main industry is fun!”)

-I really liked WB-TV’s use of Snapchat to preview some of their stars that will be at this weekend’s Comic Con.

-Speaking of Comic Con, Simon Pegg reveals all the disguises he’s used in the past to walk the floor.

-Did the Beyhive figure out some sort of advanced compression algorithm for superlong GIFs? Is there anything that fandom can’t do?!

-I just spent way too much time in this comment thread, reading about people’s celebrity encounters. The one about Tom Cruise serving kids cupcakes is great, as is the one with Topher Grace asking a girl if they once banged.

–Amandla Stenberg just joined the adaptation of Everything Everything — a book I loved. I really like this casting news!

-Screw this article about how what happened to Jones is a symptom of fan entitlement. It was racism and sexism, full stop.

-This is unexpected. D&D is making a comeback (with celebrities at least). Vin Diesel, Dwayne Johnson, Drew Barrymore, Stephen Colbert, Mike Myers, Jon Favreau, and Aubrey Plaza all say they play it.

-Unreal’s producers are defending this week’s twist. I’m not buying it. This season is definitely wobbly — possibly because of behind-the-scenes drama.

-This is an interesting article from Vulture on how women’s pictures found a new home on TV, but it feels like they’re turning a blind eye to soaps.

-Interesting: The Cut takes us inside Raya, the secret dating app for famous people.

-I need someone to explain Maria Bello’s pants to me. Do it like I’m a four-year-old (which is the age these must be designed for).

-Why would Jennifer Hudson do this?! She was just on Broadway, for crissakes!

-The only thing Democrats and Republicans agree on? The CW is a damn fine network.

–Ben Foster and Chris Pine are bank robbers in the Hell or High Water trailer.