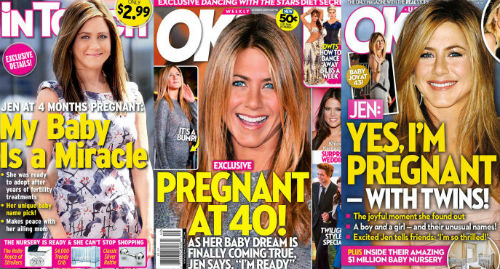 –Jennifer Aniston just wrote an op-ed for Huffington Post, and it’s the article equivalent of the fire emoji. “For the record, I am not pregnant. What I am is fed up…This past month in particular has illuminated for me how much we define a woman’s value based on her marital and maternal status.” Slay, Jen. SLAY!

–Lindsay Lohan is denying reports that she was so mad at her fiancé that she threw his phone into the Aegean Sea. And if we’ve learned anything, it’s that we should always take her word for it.

-Catastrophe has been renewed for 2 more seasons. I just finished the second season’s finale a couple of nights ago, and the way it ended left me swearing at my TV (but in a good way).

-Wait did Father John Misty steal a crystal from a juice bar or no? Hipsters confuse me.

–John Cho’s dubsmash with his Star Trek costars is adorable.

–Bryan Cranston and Stephen Colbert had fun with Too Much Exposition Theater.

-Anyone else getting the feeling that Margot Robbie is totally over talking about Jared Leto‘s Suicide Squad method acting?

-This is a great article about what someone learned by watching Hamilton four times.

-The “best” erection of Liev Schreiber’s life happened while he was fox-trotting with Steve Martin. Sounds about right.

-Here’s the trailer for Netflix’s cult movie Rebirth — which I will never watch willingly.

–Billy Eichner discovered that there’s really no difference between Pokémon Go and Grindr.

-Goddamit, Arrow. Every time I think I’m out on this show, something pulls me back in. (And by something, I usually mean hot shirtlessness.)

-Joel Edgerton and Ruth Negga struggle to legalize interracial marriage in the Loving trailer. (Are you watching Negga in Preacher? It’s pretty much the only reason I’m still tuning in every once in a while. The show is a mess but she’s phenomenal.)