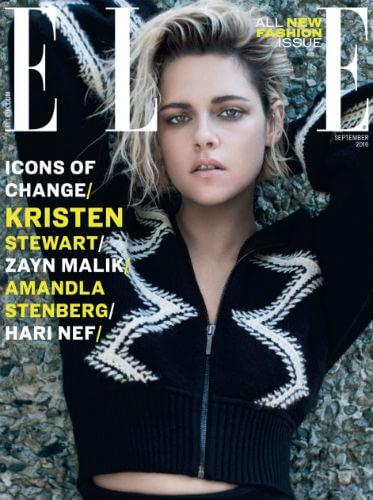 –Kristen Stewart opens up about girlfriend Alicia Cargile in her Elle UK cover story, saying “We’ve broken up a couple of times and gotten back together, and this time I was like, ‘Finally, I can feel again.'” She also talks about the different reception she gets when dating a woman: “When I was dating a guy…we were turned into these characters and placed into this ridiculous comic book, and I was like, ‘That’s mine. You’re making my relationship something that it’s not.’ I didn’t like that. But then it changed when I started dating a girl.” (Also, I love the cover.)

-I tried to get through Jared Leto‘s Rolling Stone cover story. I really did. That’s gotta count for something, right?

-Meanwhile, Will Smith made the wise choice to NOT get a matching tattoo with his Suicide Squad cast members, but he was there to point and laugh.

-Also, Will and Margot Robbie did a really weird Suicide Squad press event here that I didn’t attend and am now regretting.

-This is a great interview with Lainey on the Summer of Swift.

-I actually clapped this morning with GMA said that Shonda Rhimes decided this season of Scandal would be it’s last. Sadly, that’s not true.

-Here’s the first trailer for Marvel’s Legion series. It’s from the Fargo guys, so I’m intrigued.

-This deep-dive into Nancy’s fashion choices on Stranger Things is wonderful. (As is that show? Are you watching it? Surprise delight of the summer, especially now that Mr Robot and UnREAL are sophomore slumpin‘.)

-Also, this interview with the girl who plays Barb is great. #WeAreAllBarb

-The Flash actors are awash in racial missteps this week. First it was Grant Gustin, and now Ezra Miller created a “scene” about Darren Wilson. Sounds like it was well-intentioned but a bit tone-deaf.

-Even though I have no idea who this fashion YouTuber even is, I got lost in the #savemarinajoyce web last night. Twitter has basically constructed a giant yarn wall to figure this thing out.

–Lindsay Lohan posted an Instagram message, saying this weekend’s social media posts were due to her “acting out of fear and sadness.” (Subtext: “Also, look how great I look in this bikini!”)

–Paul Feig‘s next movie is going to be based on this Elle article about an insane real event in which supermodels were trapped in a Chilean snowstorm.

–Kate McKinnon being interviewed by a tiny Ghostbuster is the goddamn best.

-Spike TV is moving forward with its Carpool Karaoke ripoff, and has tapped Craig Robinson to host. I love him, but this is so weird.

-The reviews are generally positive for the new Harry Potter play, which is good because the plot sounds terrible.

–Samantha Bee got into a Twitter fight with her own network. Bless her.

-The TCAs kicked off today, starting with Netflix, who announced Black Mirror will be released Oct 21.

-The big Netflix news is that all six hours of the Gilmore Girls reboot will land on Black Friday: Nov 25 (aka – the last day I will step foot outside of my living room). Along with the new trailer, they showed critics the first two minutes of the premiere, and it’s apparently full of fast banter (and a Gywneth burn). Meanwhile, Amy Schumer has already responded to her shout-out in the trailer, saying she’d love Lorelai and isn’t that into water sports.