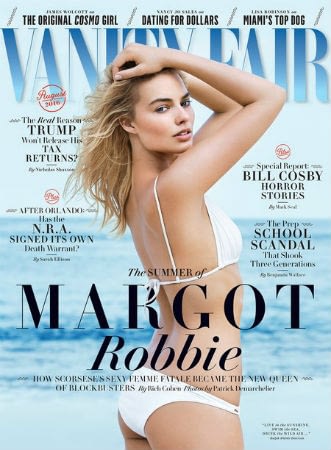 -The new Vanity Fair cover story on Margot Robbie is so fawning and male gaze-y, I actually feel bad for her. From the nonsensical opening paragraph (“She is tall but only with the help of certain shoes”) to the unintentionally sexual flourishes (“The job of the celebrity journalist: peg ‘em so it’s not only as if you know ’em but always have known ’em or someone just like ’em. But Robbie is too fresh to be pegged”) to the weird transitions (“We sat for a moment in silence. She was thinking of something; I was thinking of something else”), it’s no wonder the internet is tearing it apart piece by superfluous piece. Not surprisingly, it’s from the same author who wrote that atrocious Nic Pizzolatto profile last year.

-At least he’s not lying about the fact that she’s only 26.

-Speaking of cover stories, Gwen Stefani opens up about her discovery of Gavin Rossdale‘s rumoured affair with the nanny in the new Harper’s Bazaar.  She says she found out the day after the Grammy Awards. “It was the beginning of hell. Like six, seven, eight months of torture, trying to figure out this big secret” and adds “All I wanted my whole life was to have babies, be married, like what my parents have”.

-This is fascinating: Jezebel polled some publicists to see if they think the Taylor Swift/Tom Hiddleston romance is fake. (I want to read an entire memoir written by that third publicist, since her whole quote is basically the embodiment of the fire emoji.)

–Francis Bean‘s short-lived marriage may have cost her the guitar her dad played during Nirvana’s Unplugged appearance.

-To prep for its big move from CBS to the CW, Supergirl’s first season will re-air starting in August. It wasn’t for me, but the more eyeballs on female superhero shows, the better.

–Stephen Colbert‘s story about meeting his wife will make you swoony.

–Jesse Williams is vacationing with his Grey’s costar Ellen Pompeo, and she shared an adorable video of him pushing her off a paddle board.

-Also, even though he’s on holiday, Jesse’s still woke.

-Another day, another story about Louis CK being the exact opposite of how we all hope he is. ::sad face::

–Mila Kunis looks lovely in her makeup-free shots Glamour magazine. I mean, if I was a rich 32-year-old I’d probably have dewy skin too, but still.

–Conan O’Brien and Timothy Olyphant prove “TV’s a lie” in this scrapped clip.

–Alex Kingston has joined the Gilmore Girls revival, which makes me very happy.

-Nothing really happens in the first trailer for FX’s new show Wake Up, but it stars Donald Glover so I’m already in the bag for it.