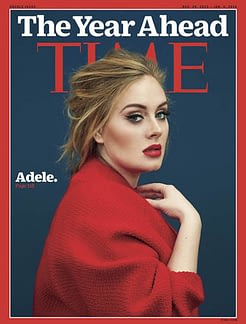 –Adele looks stunning on the new cover of Time (her eyebrow game remains fierce). She talks about why Americans love her, motherhood, and her love of Beyonce and Taylor Swift.

-Wait, Madonna is now saying Sean Penn never hit her?! What? There was a police report! Come on, now.

-This was the funniest sketch from Tina Fey and Amy Poehler‘s SNL ep (made even funnier by the fact that I was watching it with my mother, who was SCANDALIZED).

–Amy Schumer also joined in on the fun for the Dope Squad skit.

-Also, Harrison Ford was reportedly paid 50 times more than his Force Awakens costars. After seeing the movie, this doesn’t bother me.

-Drew at HitFix WENT OFF at Tom Hardy on Twitter, and it was a wonderful thing to behold. Junkets are the worst, but actors who don’t understand that it’s part of their job suck.

-Someone compared how male critics reviewed Neighbors vs Sisters, and it’s pretty sad (though not surprising).

–Mariah Carey and Nick Cannon reunited to help their kids celebrate the holidays.

-Do you think Mariah‘s new BF is holding her like this because he’s sweet, or because she doesn’t want to hold herself up on her own?

-Also holiday reuniting for the sake of the kids: Bennifer.

–Gwen Stefani and Blake Shelton are taking their love to Twitter. Yay?

-I didn’t know that Patrick Dempsey is in the new Bridget Jones movie. That’s… disappointing.

–Drake Bell (who I only know for being a little shit on Twitter) was arrested for suspicion of DUI.

-This Good Wife promo almost makes me want to tune in again. Almost. There really needs to be some sort of support group for people susceptible to getting sucked back into bad TV.

-Congrats to Unreal’s Shiri Appleby (who will always be Liz Parker to me). She just welcomed a baby boy.

-Aw. R Kelly is sad that no one wants to support him. Poor baby.

–David Fincher is making a Netflix series with Charlize Theron? I’m so in.

-Can Channing Tatum just put his movie career on hold to be on Lip Sync Battle fulltime? KThnxBai