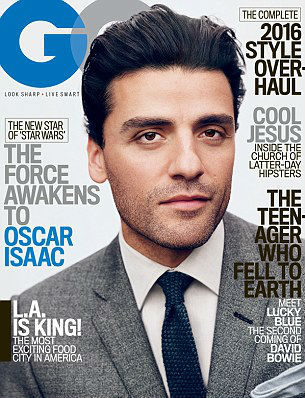 -I read Oscar Isaac’s new GQ profile and then looked at photos of him at last night’s premiere and now I think I might be pregnant.

-A ton of celebs showed up at the Star Wars premiere, but Joseph Gordon-Levitt’s homemade Yoda costume is all anyone’s talking about.

–Joshua Jackson’s father is not worried about those rumours of Diane Kruger cheating on Josh with Norman Reedus. But I am, Papa Jackson. I AM.

–Christina Aguilera was reportedly so drunk at Seth MacFarlane‘s holiday party that she almost fell into the Christmas tree. (We call that ‘doing the Kiefer’ around these parts).

–Bradley Cooper has fond memories of his Wet Hot American Summer sex scene. So do I, Coop. So do I.

–Madonna will show up to her concerts whenever she damn well pleases, thankyouverymuch.

-Billy on the Street is having an intensely epic season. Sarah Jessica Parker appears on the latest episode, where he loudly and emphatically defends Sex on the City 2.

-I just discovered that YouTube reaction videos are a thing and they confuse me. People record themselves watching movie trailers and TV shows and I just don’t get it. That being said, there’s something great about watching Kevin Smith sob hysterically over The Flash finale.

-I love when Stephen Colbert told Jennifer Lawrence “you are one of the most relatable people out there” and she instantly responded “he says on television.” Refreshingly self-aware.

-Well, this is terrible: Downton Abbey star Michelle Dockery’s fiancé has died of cancer at 34.

–Beyoncé is wearing a Christmas tree and somehow still makes it work because she is a precious magical unicorn.

–Kylie Jenner just made her Vogue debut? Does Anna know about this?!

-I keep forgetting that there’s a new episode of Luther dropping on Thursday (and I can even watch it legally in Canada! Wut?) and then I’ll see a preview clip of it and it’s like a recurring Christmas morning.

–Gugu Mbatha-Raw is doing a Black Mirror episode and all is right with the world.

–Tina Fey showed off her Elmo and Sofia Vergara impressions on The Tonight Show last night.

–Tina Fey and Amy Poehler totally think Liz Lemon and Leslie Knope would be friends. Of course they would.

–This article on watching this season of You’re The Worst with a spouse who has depression kind of gutted me.

-Here’s the first trailer for Star Trek Beyond.

-Step back into the Harry Potter universe with the first teaser trailer for Fantastic Beasts and Where To Find Them.