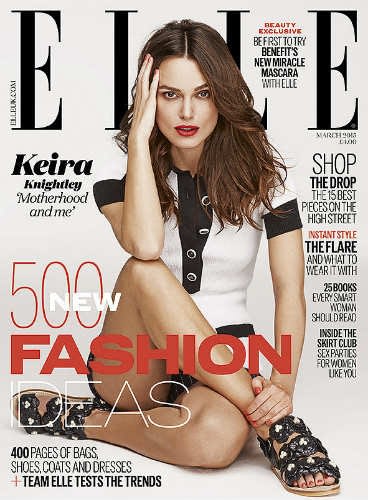 –Keira Knightley looks awesome on the cover of Elle UK, where she talks about how her name is the result of a spelling error.

–Justin Bieber was a surprise guest on Ellen, and afterwards posted a video of how nervous he was, saying “I didn’t want to come off arrogant or conceited or basically how I’ve been acting the past year and a half.” It’s actually kind of sweet.

–Gwyneth Paltrow‘s latest issue of GOOP says you should steam your vagina, while an OB/GYN really wishes you wouldn’t.

–Joss Whedon is as frustrated about the state of female superhero movies as the rest of us.

-It’s Parenthood’s last episode tonight. Are you ready? Do you have an ample supply of tissues on hand? To prep your tear ducts, here’s a heartfelt tribute to the show penned by its creator, and a look back at all the times it made you sob uncontrollably.

-Plus, the cast has spent the day tweeting their sadness.

-Serial and Sarah Koenig want your ideas for Season 2, and it doesn’t have to be a crime story.

-I’ve heard only great reviews about ABC’s new sitcom Fresh Off the Boat, but I’ve never seen a show creator who has to get out of his own way so much. First he did that weird Vulture essay slamming the network, and now he’s called the person behind the show’s Twitter handle “a mouth-breathing psycho.”

–Sean Penn says he’s “surprised to be in love” and will consider marriage to Charlize Theron as his “first marriage.” (He did say nice things about first wife Madonna, though. Second wife Robin Wright? Not so much.)

-Fox’s Empire continues to grow in the ratings week over week. This is getting weird.

-There are not enough words to convey how conflicted I feel for hating on Cate Blanchett’s outfit.

-I swear to god Hollywood, if you do a U.S. version of Black Mirror I will punch you in the dick.

-Usually we have to wait until the Super Bowl for all the big new movie trailers, but a bunch of teasers have already landed, including  Tomorrowland, Ted 2 and Terminator Genisys.