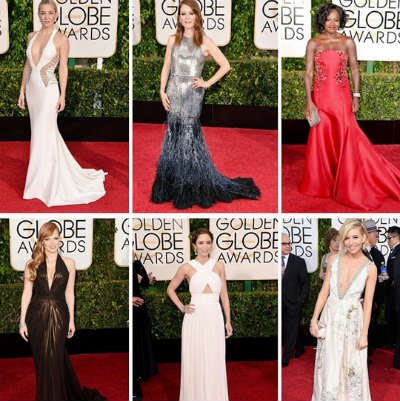 Nicole and I drank a lot of champagne and watched the Golden Globes red carpet, which wasn’t as tragic as years past but there were still some definite hits and misses. Here’s our take:

Nicole: When I saw Kate Hudson in the most Versace of all Versace dresses, I wanted to front-piggyback her. True story. It’s just the right amount of trashy and I spent the rest of the night trying to catch pictures of how she sits down in that thing.
Jen: This is an unbelievably sexy dress. Usually I’m not a fan when presenters try to outshine nominees, but this was too great to deny.

Jen: As much as I love her, Anna Kendrick doesn’t always knock it out of the park on the red carpet, but this Monique Lhuillier was a home run. It was delicate, pretty and perfect for representing a Cinderella role.
Nicole: Finally!!

Nicole: I tend to enjoy Kerry Washington’s interesting choices and this Mary Katrantzou dress hits it perfectly for me. The length is great as is the fit and the colours shine against all the black and white on the carpet tonight.
Jen: You liked this one way more than I did. I liked that it was different, but I’m still not sold on the blue panels on the side.

Well, the #GoldenGlobes carpet can end now: No one is trumping Jessica Chastain pic.twitter.com/fvj9B0AtIj

Jen: Jessica Chastain’s Versace dress looked amazing on camera – all slinky with peeks of gold. It oozed sex appeal, which is not usually what I associate her with, so kudos.
Nicole: And her makeup was completely on point. That smokey eye crushed it.

Nicole: I’m so in love with Julianne Moore’s sexy, slinky silver and black Givenchy gown! It’s a real departure from the clean lines of the usual Tom Ford gowns she wears and she is outdressing lots of sexy young’uns tonight.
Jen: Agreed. I usually hate feather accents on dresses, but this one actually works for me because she’s so very hot in in!

Jen: Ok, I know that Ruth Wilson’s Prada isn’t going to be everyone’s cup of tea. And also the fit isn’t perfect but damn, if I don’t kind of love this. She looks like she’s about to step onto the bridge of a spacecraft and jet off to a galaxy far, far away — and I dig it.
Nicole: You’re on your own with this one. HARD PASS!

Nicole: This feels like such a strong outing for Viola Davis. Her Donna Karen Atelier dress is elegant and just a bit whimsical with the colour giving her a fabulous glow.
Jen: Agreed. I may have given up on her show, but I still love her and am glad she continues to bring it on hard on the red carpet.

Jen: I love Felicity Jones’ Dior dress. She’s known for taking red carpet risks, and this colour and silhouette is different from anything else on the carpet.
Nicole: It’s pretty, but it’s kind of boring. I feel like it would be very appropriate for a wedding, not an awards show.

Jen: I love Amy Poehler and would give her my first born, but I would rather give her the name of a stylist. Her red carpet dress was a great colour, but so very unflattering. She fared better during the show, but this was a bad first impression to kick off the night.
Nicole: Is that an elastic waistband? Not great.

Nicole: What the hell, Emily Blunt and Rosamund Pike!? The Michael Kors and Vera Wang dresses are so similar and so terrible and not even a bit original. Blunt’s Kors is slightly better but I just think that they can both do so much better. Also, if they can manage to keep tweens out of the same prom dresses, can they not sort this out for award shows? Sigh.
Jen: I wasn’t a huge fan of all the pale dresses. Also, I know Rosamund just had a baby five weeks ago and wanted to show off her body (which looks a-mah-zing, btw), but this was oddly unflattering.

Jen: Did SNL’s Gilly pick Kristen Wiig’s outfit? How else to explain this peasant-top mess of a dress? I didn’t hate anything more than I hated this.
Nicole: She has a special talent for picking the worst outfit of the night, and this was no exception.

Nicole: Man alive, I loved so much of the Valentino collection this year and it always astonishes me that people as lovely as Claire Danes would fall into something so tragically unflattering with so many other great options.
Jen: She said this dress was like “wearing art,” and though I can understand what she means, I’m not sure that it translates on camera. It’s a bit of a mess.

Keira Knightley said it took 33 people to make this dress (and no one said, “Um .. hang on..”) #GoldenGlobes pic.twitter.com/KAWaK92A4r

Jen: Kirsten Wiig wasn’t the only one with a terrible peasant neckline. Chanel did wrong by Keira Knightley by sticking her in this. It’s too bad, because I love the print.
Nicole: Why Chanel, why?

Nicole: Lupita Nyong’o, did you cash in all your favours last year? This chest-flower exploding Giambattisa Valli is not good. I judge it more harshly because it’s you.
Jen: Agreed, it’s never a good sign when it looks like a florist puked on your chest. It sucks even harder because we expect so much better from her.

Jen: I felt like most people on this red carpet needed a necklace, but no one more so than Maggie Gyllenhaal. If you’re going for the droopy, strapless and wrinkled look, at least accessorize, goddamit!
Nicole: I don’t know — I expect so little from Maggie that this delivered as perfectly mediocre.

Jen: There were a lot of chilly grays on the red carpet tonight, which I didn’t hate, but all could have been greatly improved with a dark lip, especially Diane Kruger and Amy Adams.
Nicole: Agreed, I was underwhelmed by both dresses.

THIS is how much Lena Dunham doesn’t care what you think of her #GoldenGlobes dress: http://t.co/oM9MWK0Svn pic.twitter.com/Mjri0x4bxW

Nicole: I loved Lena Dunham’s playful red asymmetrical Zac Posen despite the poor fit. Her hair and makeup were perfect and she looked like she was having so much fun.
Jen: Yeah, it kind of fell apart under scrutiny but I like how polished it is compared to her usual red carpet look.

Jen: This was Amal Clooney’s very first red carpet, so I was kind of hoping to be more blown away than I was. Basic black is classy and expected, but at least she gave us a bit of a twist with the white gloves. But were they supposed to be so slouchy?
Nicole: I LOVE THIS! She was elegant and haughty. Also, what amazing root lifter is she using on her hair? Honestly, hook some sisters up.

Nicole: Emma Stone’s Lanvin pantsuit was so pretty and it reminded me of the spirit of the Emma Watson pantsuit from last year’s Globes. I love a good sparkly pantsuit.
Jen: I wasn’t in love with this, but Emma Stone can do no wrong in my books so she gets an automatic pass.