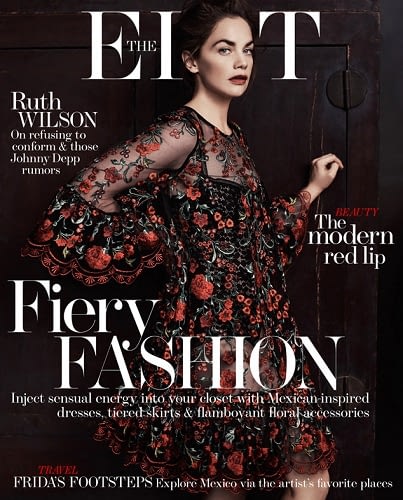 –Ruth Wilson (who will always be Alice Morgan to me) looks fantastic on the cover of The Edit, in which she dismisses rumours that she’s romancing Jake Gyllenhaal by saying “we’ve become like brother and sister a little bit.” She also balks at the direction she got during some of The Affair’s sex scenes. “I kept insisting, ‘Why have I always got to do the orgasm face?’ There should be a male orgasm face.”

-There’s more today from Jennifer Aniston‘s THR interview, including a bit where she waves off the Brangelina drama with: “Nobody did anything wrong…If the world only could just stop with the stupid, soap-opera bullshit. There’s no story.”

-If Selena Gomez has taught us anything, it’s that our relationships aren’t real until they’re splashed all over Instagram.

-I’m still not going to watch it, but Empire is a (desperately needed) hit for Fox. It’s INSANELY rare for a TV show’s ratings to improve with each new episode.

–Anne Hathaway and Jon Stewart getting a case of the giggles over the plot of her movie is undoubtedly more entertaining than the movie itself.

-Here’s a peek at Mindy Kaling‘s new Super Bowl ad, in which she thinks she’s invisible. Rumour has it the guy at the end will turn out to be Matt Damon — though that dude looks really grey.

-I’m all for more female superheroes on TV, but the girl from Glee & Whiplash seems like a bit of a bland choice for Supergirl. (Case in point: I’ve watched both of those things and despite her photo being all over Twitter today, I still had to IMDB her to remember where I knew her from.)

-Speaking of TV, it’s interesting that all the big stories coming out of Sundance so far seem to be about the small screen.

-Also at Sundance, a new movie from the directors behind Half Nelson, which remains my favourite thing Ryan Gosling has ever done. Let’s see if they can do for Ryan Reynolds what they did for the Gos.

-One film that is making waves at Sundance is the Scientology doc based on Lawrence Wright‘s book Going Clear: Scientology, Hollywood and the Prison of Belief (which I loved).

-More Reddit users have come forward with NSFWish tales of being approached by John Travolta at the gym at 3 a.m.

-Canadians may need to use some geo-blocking magic to watch it, but Amazon is streaming Transparent free this weekend if you want to see what all the fuss is about.

–Adam Brody is getting flirty with his stepsister in the first teaser for Billy & Billie. I miss that kid.

-Congrats to Rachel Leigh Cook, who’s expecting a baby with the hot fake British guy from the Vampire Diaries.

-The first trailer for Tina Fey’s Netflix sitcom, The Unbreakable Kimmy Schmidt, has arrived. The post-TCA consensus from TV critics I follow on Twitter seemed to be that the pilot is a mess, but a super funny mess.