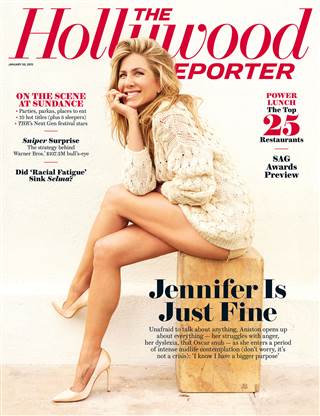 -Hollywood Reporter updated their online story about this week’s cover girl Jennifer Aniston with assurances that she’s fine after being snubbed at the Oscar noms — just in case you were worried. In the story, she talks about her fraught relationship with her mother and her struggle with dyslexia.

-It’s been a big month for Zooey Deschanel. First she announced her pregnancy, and now she’s announced her engagement to baby daddy Jacob Pechenik.

-Speaking of pregnancies, is this hinting that an Anne Hathaway bump watch has begun?

–Victoria Beckham is the latest star to answer 73 questions for Vogue. I’m mesmerized by her top lip.

–Larry Wilmore‘s second episode in Colbert’s old slot was last night, and he came on strong right out of the gate by going after Bill Cosby hard. “Let’s consider for a second he didn’t do it. …. okay, that’s done. That motherf**er did it.”

–Keri Russell played Inflatable Flip Cup with Jimmy Fallon last night, and it might be my favourite Tonight Show game ever.

-In other late night games, Stephen Amell and Eric Stonestreet proved neither knows what a cornucopia is on Kimmel last night.

-Early (non-spoilery) reviews for the Breaking Bad prequel Better Call Saul are starting to trickle in, and they’re mostly positive.

-Speaking of TV retreads, the American version of Luther continues to trudge along, but it’s cast-contingent, so… at least there’s that?

-I don’t fully understand what Marvel announced yesterday but comic book fans are freaking out about what it means for the upcoming movies.

–Tatiana Maslany is testing for the next new Star Wars? Hells to the yes!

-I love The Mountain Goats but I’m not sure I’m onboard with news that their new record is entirely about professional wrestling.

–Chris Evans and Chris Pratt are having the politest, most gentlemanly Super Bowl bet ever.

-Speaking of Chris Pratt, this week’s Parks and Rec might have been one of the best episodes of the entire season — and not just because of the awesomely bad rendition of “We Didn’t Start the Fire.” This deleted scene is also great (of course Ben’s been sneaking veggies in Leslie’s waffles).

–Salma Hayek is shooting guns in her underwear (’cause Hollywood!) in the new Everly trailer.