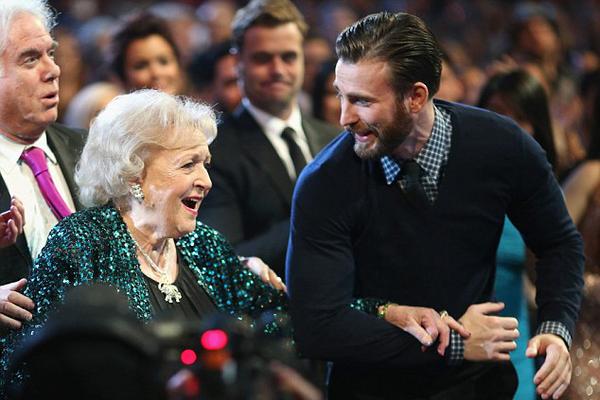 -Captain America himself Chris Evans made the entire internet ovulate when he jumped up to escort Betty White up the stairs at last night’s PCAs.

–Chris Pratt didn’t make it to last night’s People’s Choice Awards, but he appeared in the opening skit with wife Anna Faris, who hosted.

-The PCAs are beyond pointless and its online voting system means the gongs just end up going to whichever show/movie has the most fervent fandom but I’m still glad Jane The Virgin and The Flash won, especially if it means more people will watch The CW.

-Speaking of CW stars, Stephen Amell continues to use his Facebook page to do amazing things for charity.

–Jennifer Lawrence and Chris Martin are giving their relationship another go, according to People (which basically means according to their publicists).

-I really liked this article about Taylor Swift’s image strategy when it comes the photos of friends she posts on Instagram.

–Jimmy Fallon is on a roll this week. First he inadvertently dissed Nicole Kidman and then he arm-wrestled with Liam Neeson.

-Fargo has added Nick Offerman, Kieran Culkin, Patrick Wilson, Ted Danson and Jean Smart to its S2 cast. All those people are great but I really hope there’s still room for an unknown to break out like Allison Tolman did in S1. However, the latest issue of EW had a script preview featuring a scene between Kirsten Dunst and Jesse Plemons, and my interest is officially piqued.

–Jennifer Lopez may have reunited with that trolly guy whose name I never bothered to learn.

-This is flames: Alan Sepinwall reviewed every episode of The Wire twice, once for newbies, once for veterans.

–Phylicia Rashad says she was misquoted when she defended Bill Cosby, but her “explanation” doesn’t really help matters.

–Jennifer Love Hewitt is expecting her second child with the dude from Revenge.

–Chris Pratt told Ellen the cutest story about his son. “He’ll say, ‘Hm, I thought about it and no thanks, Dad, Not right now,’ and I’m like, ‘HE’S SO POLITE! What am I supposed to do?'”

-Also, Chris “randomly” showed up to Jimmy Kimmel Live last night and it was amazing.

-I really liked this article with Wes Anderson’s cinematographer talking about how he shot nine iconic scenes.

-The people behind Serial have responded to Kevin Urick and The Intercept interviews. Good for them. The tone of that last article was so petulant.

–Drake continues to make all of the rest of us here feel like bad Torontonians.

-The final four episodes of Parenthood begin airing tonight. I really liked this article on how it’s one of the last family-centred dramas left, especially since it references the wonderful and underappreciated Once and Again. (Most O&A eps are on YouTube, including one of my favourite hours of television ever — and seeing as it features Mischa Barton, that’s really saying something!)

–Olivia Wilde is back from the dead in first trailer for The Lazarus Effect, which seems like Flatliners: The Sequel.

–The Voices trailer makes it seem way better than the actually movie is. Blame Anna Kendrick.