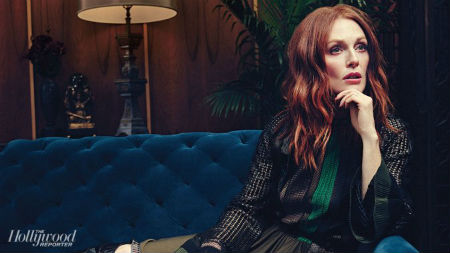 –Julianne Moore looks stunning in the pages of The Hollywood Reporter (though I’m not as in love with the cover). In the story, she talks about getting Twitter flak for her gun control comments, and losing her faith after her mother’s death.

–Ewan McGregor is too polite to tell you about his huge penis, so Colin Farrell has selflessly volunteered to spread the word. He’s doing God’s work.

-Speaking of actor junk, no one can stop talking about Chris Messina’s nude scene in his new Sundance film.

-More details have emerged about Emile Hirsch‘s alleged assault on a Paramount executive. He reportedly put her in a chokehold. Charming as ever, then?

–Benji Madden and Cameron Diaz enjoyed a very un-Hollywood honeymoon in Wyoming and are now back in LA and looking gushy.

-Here’s a great piece on Tyrese (who’s appearing more than a little desperate to play the Green Lantern) and a history of “thirsty” actors.

–Amal Clooney had a perfect response to being asked about her style while representing Armenia in a human rights trial.

-So we’re at the point where Lindsay Lohan is poking fun of her DUIs (AND getting paid for it)? Blurg.

–Joss Whedon says Age of Ultron will probably be his last Avengers movie because he wants to go back to making his own stuff. Fingers crossed that includes Dr. Horrible’s Sing-Along Blog 2!

-I continue to be so very impressed by Gabrielle Union.

-Speaking of impressive, Emma Watson told a young girl to ignore her dad’s advice and become an engineer.

–Taylor Swift is trying to trademark some common phrases, which isn’t really how that works.

–Johnny Depp joked that he missed a press conference because he was fighting a chupacabra. (I totally know what that is from The X Files, which basically taught me everything I’ve ever needed to know about life).

-Here are JK Simmons‘ promos for SNL. I have high hopes for this episode!