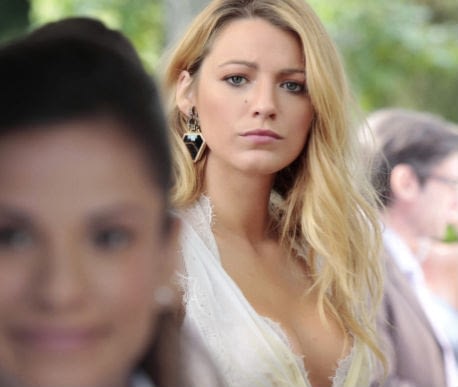 -Here is Blake Lively and Ryan Reynolds‘ big wedding spread in Martha Stewart Magazine — which is only exciting if you care about photos of mini tarts and flowers. Apparently,  “they remain protective of images of them on their most heartfelt occasion.”  To recap: Blake Lively > Jessica Biel.

–Claire Danes is no longer the predominant crier in her household. She just gave birth to a son named Cyrus Michael Christopher Dancy.

-In other baby news, Shiri Appleby (who will always be Liz Parker to me) is pregnant.

–Katie Holmes‘ flirting techniques sound exactly as awkward as you’d expect them to be.

-I love Tina Fey and Paul Rudd, but these Admission trailers just aren’t doing it for me.

-No surprise here: Ke$ha has retracted her statement about being forced to sing “Die Young.”

–Tim Tebow and Camilla Belle have split. She’s soon going to run out of famous virgins to date.

-Um, guys? Don’t freak out but there might actually be a Pitch Perfect sequel. I heart that movie so much I even gave the DVD to my favourite waiter for xmas. (And yes, I get my fave waiter xmas gifts. It’s the least I can do for him sneaking me free drinks all year long).

-This CPR instructional video starring Vinnie Jones is all kinds of great.

–LeAnn Rimes was on The X Factor last night — and she was a bit of a hot mess.

–Anthony Bourdain‘s Layover episode taped in Toronto is out.

–West Wing costars Bradley Whitford and Matthew Perry are reuniting on an upcoming ep of Go On. Fingers crossed for a walk-and-talk!

-If you — like me — didn’t understand when Max Factor signed Gwyneth Paltrow as their spokesperson, her new ad is going to be even more incomprehensible. It’s a bit off-brand, no?

-Here’s Jennifer Aniston on the set of her new movie looking very unpregnant-y.

-The guy who plays Dot Com just posted a photo from the final day of filming 30 Rock. Sadface.

-The red-band trailer for This is the End, starring Seth Rogen and James Franco, has landed. I LOVE the premise of this one: it’s a bunch of celebrities (including Jonah Hill, Jay Baruchel, Danny McBride, Craig Robinson, Aziz Ansari, Rihanna, Paul Rudd, Martin Starr, Mindy Kaling, and Emma Watson) playing themselves as a bunch of famous people trying to survive an apocalypse together.

-Speaking of trailers, the second Gatsby one has landed.