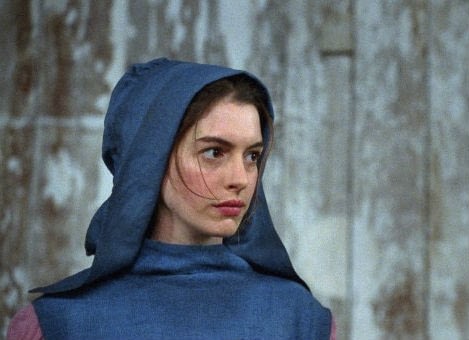 –Anne Hathaway pulled a Britney at last night’s Les Mis premiere by flashing her underwearless crotch while getting out of her car. Did she retain nothing from her princess training?!

-Meanwhile, I love how Anne is on a mission to teach the world how to have a kiki. First she mentioned it on Letterman, and now she’s telling Entertainment Tonight about it.

–Jennifer Aniston wore a bulky winter coat, so of course she must be pregnant.

-How the mighty have fallen! Jennifer Lawrence topped AskMen’s annual poll of the most desirable women, while Kim Kardashian dropped a whopping 90 points.

–Hayden Panettiere is having a tough year. Nashville is kind of flopping and now she and her boyfriend have split.

-Usually everything that comes out of Megan Fox‘s mouth sounds about as comprehensible as Charlie Brown’s teacher, but I do appreciate the fact that she’s not sugar-coating her labour story.

–Amanda Seyfried talks about Channing Tatum’s loyalty to his wife, just in case you somehow weren’t already convinced of his perfection.

–Lindsay Lohan convinced the Bravo show Million Dollar Makeover to reno her house and then refused to film the big reveal. She’s a peach!

-Meanwhile, Lindsay skipped court to follow Max of The Wanted to Dubai. Max responded by tweeting a photo of another girl’s boobs.

-Also, Charlie Sheen says she’s yet to thank him for giving her $100k to pay off her tax debt.

-Want to watch a rap battle between Santa and Moses? Oh, and did I mention that Moses is played by Snoop?

-The Spice Girls reunited on a red carpet last night — but of course Victoria arrived separately.

-Even the director had no idea what was happening in Brad Pitt‘s Chanel ads.

-I’ve yet to watch this week’s Gossip Girl, but everyone’s tweeting about this clip (in a “can you believe they actually aired this?!” kind of way).

–Jon Stewart says he almost quit the Daily Show when it first started because so many “assholes” worked there.

–Lea Michele tries to convince us she’s not a diva, fails miserably.

–A movie starring Sarah Paulson and Chris Messina? I’m in.

–Taylor Swift and Harry Styles recreated the Dirty Dancing lift, proving that her life really is a rom-com.

–Avril Lavigne just covered Nickelback‘s “How You Remind Me.” On behalf of my entire country, I’m sorry.

-CityTV just announced that it’s bringing Cougar Town back, so we Canadians who don’t have TBS can still keep up with the Cul de Sac crew.

–Nick Cannon just revealed that he sometimes masturbates to his wife’s song “Hero.” See? This is what happens when she lets him talk.

-It’s a crazy day for movie trailers. First up is the new Lone Ranger. So wait, is Armie Hammer a zombie?!

-Another trailer for Oz: The Great and Powerful has landed.

-But the one that everyone’s talking about today is the new trailer for Man of Steel, which looks pretty great.