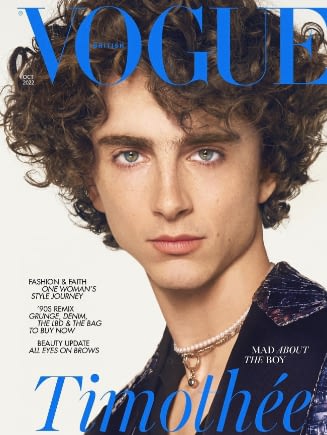 –Timothée Chalamet is British Vogue’s first male solo cover star in their 106-year history. In the interview, he reveals he has 7(!) musical numbers in the upcoming Wonka film. “I hate to say it, but the dream as an artist is to throw whatever the fuck you want at the wall, you know? And I guess what I’m realizing is that one’s personal life, one’s adult life, can be quite boring, and the artist’s life can still be extraordinary.”

–Quinta Brunson covers Variety and talks about her Emmy win and why Abbott Elementary isn’t ready to be named Best Comedy yet.

-Also, she got back at Jimmy Kimmel by interrupting his monologue. “You know how when you win an Emmy you only have 45 seconds to do an acceptance speech, which is not that much time? And then you get less time because somebody does a dumb comedy bit that goes on a bit too long?”

–Blake Lively is pregnant with her fourth child with Ryan Reynolds.

-Speaking of people with lots of babies, Nick Cannon has just welcomed his ninth child.

–Kanye West has terminated his partnership with Gap.

–Michelle Branch and Patrick Carney are trying to work things out instead of divorcing.

-I wish it wasn’t for old IP, but I’m very much here for Regé-Jean Page and Glen Powell being in a new Amazon Prime series together.

-House Of The Dragon star Milly Alcock says she finds it “fucking ironic” that the show’s fan base — which is mostly men — is pitting the female characters against each other.

-The reviews for American Gigilo aren’t great, but has anyone had a better 6-month run than Jon Bernthal?

–Naomi Ackie stars in the first trailer for the Whitney Houston biopic, I Wanna Dance With Somebody. She’s captured Houston’s speaking voice  perfectly.

Chris Evans Talks About Suffering From Anxiety and Wanting Kids