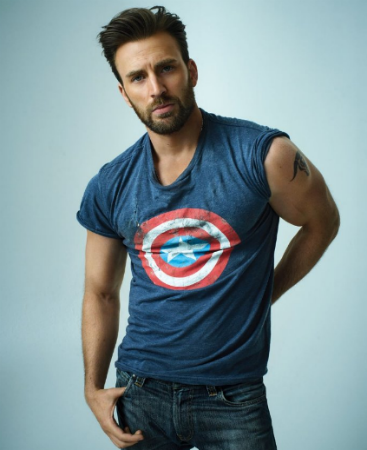 –Chris Evans‘ charm offense continues with this game of frozen blackjack with Jimmy Fallon, and this interview with Rolling Stone, in which he talks about his insecurities at premieres, his mother, and his desire to have children. (Sidenote: how do I make the photo above the desktop image inside my eyelids?)

-So sources close to Janet Jackson are claiming that the singer (who turns 50 this month) is pregnant. Hmmm.

–Chloë Grace Moretz doesn’t look like an actual human being on the cover of Glamour, but I love the boots she wears inside.

–Rumer Willis is calling out Vanity Fair for photoshopping her jaw.

-Why did so many people take selfies in the bathroom at the MET Gala? Was the cellphone ban so oppressive that they just couldn’t help themselves? The pic of Kristen Stewart and Willow Smith (with a surprise Jemima Kirke cameo) remains my fave.

-This Woody Allen interview is all kinds of icky, especially the part where he gushes about what a great father figure he is to Soon-Yi…who is his wife.

-It’s the greatest tragedy of my life that Matthew Rhys and Matthew Goode‘s wine show is geo-blocked over here. Instead, I have to be content with tiny clips about Rhys sniffing wine up his nose.

-So I guess we’re getting new music from Justin Timberlake this week?

-This is such a good argument that The Flash’s recent struggles mean Team Berlanti is over-worked. I’m still digging Arrow, but The Flash, Legends of Tomorrow and Supergirl are all limping along right now.

-Speaking of interesting TV articles, I like this one on who bears responsibility for social media spoilers.

-Actual question: has Drake ever had a real girlfriend?

–Jay Z’s reportedly responding to Lemonade with an album of his own, because he has feelings too, dammit.

–Hulu has renewed The Mindy Project for season 5 and The Path for season 2. I’m surprised by Mindy’s reprieve; that show even airs on TV here and it’s still dropped off the buzz map completely.

–Demi Lovato is maybe feuding with Nicki Minaj over some perceived Instagram shade. Wake me when someone yells “What’s good?”

-This Aisha Tyler interview had more testicle talk than I was anticipating, but it’s still great.

–Blake Lively needs a bigger rock in this trailer for The Shallows.

Amy Schumer: “I Have a Belly. And I Have Cellulite. And I Still Deserve Love”