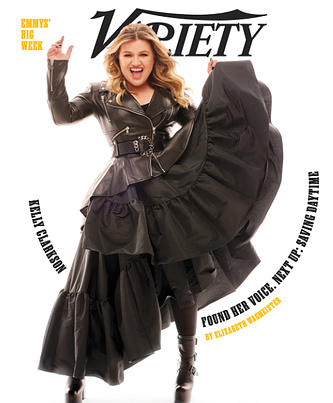 –Kelly Clarkson covers Variety and talks about being thrust into the lucrative 4 p.m. time slot recently vacated by Ellen DeGeneres (“My team is very stoked, and I believe in my team. But by no means am I filling anyone shoes — I don’t want that pressure”), going back on tour (“I know there are other guys and girls out there that have been through this kind of breakup who are going to need to scream at the top of their lungs”), her level of fame (“I find myself to be incredibly normal. I don’t know how that happened. I always feel bad for artists who can’t go anywhere. I can go to Target all the time, anytime I want. Somehow, I lucked out”) and why she doesn’t like going on movie dates (“We’re not going to talk during a movie. A perfect date for me would be on my ranch, pack some wine, go off in the forest somewhere and chit-chat. I like that. I’m very chill.”).

-Ok, this is the best explanation I’ve seen for the “spitting” video. Chris Pine had his sunglasses in his crotch area and is seen picking them up as soon as Harry Styles sat down. Probably because Styles made a dick joke about the glasses. Nothing else makes sense.

–Florence Pugh’s IG caption about the Venice Festival thanked the “cast and crew who helped make the movie” and included a shoutout to Chris Pine “for being the no.1 photographer, getting down on white pressed trousered knees for angles.. now that’s dedication.”

-Also, I hope Pine sees this and venmo’s this guy $400. Cause this is shitty behavior.

–Kourtney Kardashian has been named “sustainability ambassador” for for fast fashion brand Boohoo, which was named one of the least sustainable fashion brands by the UK Parliament’s Environmental Audit Committee in 2019, and was found to be paying Leicester garment workers £3.50 an hour the following year.

–Jerry Seinfeld is modeling Kith’s new line and I have lots of questions about his sudden abundance of hair.

–Norman Reedus opened up about his “terrifying” concussion on the Walking Dead set, saying “I thought I was going to die.”

–Justin Bieber has postponed his remaining tour dates following his show in Brazil last weekend. “After getting off stage, the exhaustion overtook me and I realized that I needed to make my health a priority right now.”

-Meanwhile, Angelina Jolie’s company, Nouvel, has filed a $250 million lawsuit against Pitt, alleging that the actor seized control of their French winery and estate as retaliation over their divorce.

-The Boys’ Erin Moriarty says her mental health has been impacted by comments from fans about her appearance and her character. “I do feel silenced. I do feel dehumanized. I do feel paralyzed.” Costar Jack Quaid commented on her post “Keep shining bright. Leave the trolls to us. We got your back.”

-Meanwhile, The Boys creator Eric Kripke slammed the show’s toxic fans: “If you can’t be kind, then eat a bag of dicks, fuck off to the sun & don’t watch The Boys, we don’t want you.”

-This is an excellent interview with Rosie O’Donnell, who plays a homicide detective in Showtime’s new series American Gigolo.

–Jason Momoa shaved off his hair to protest single-use plastics.

–This thread is a great explainer about what’s happening with movie studios right now, and how the rollbacks of antitrust legislation is changing the industry. It’s now legal and more profitable to kill WB, one of the oldest studios in Hollywood.

–Kate Walsh is returning to Grey’s Anatomy this season in a recurring role.

–Anna Kendrick is making her directorial debut with the true crime thriller The Dating Game. She’ll also produce and star in it.

–Cate Blanchett is getting rave reviews for her performance in Tar.

–Lily James, Shazad Latif, and Emma Thompson star in the new cross-cultural romcom What’s Love Got To Do With It? I picked it as one of my TIFF movies for this weekend before really knowing much about it and am glad it looks cute!

–Mila Kunis is the Luckiest Girl Alive in the trailer for Netflix’s upcoming thriller. According to GoodReads I finished this book but I have zero recollection of what happens.

–Harry Styles finds forbidden love in the new trailer for My Policeman ahead of its world premiere at TIFF this weekend.

–Jessica Chastain plays a nurse who risks it all to bring down her serial killing coworker (Eddie Redmayne) in the upcoming true-crime thriller The Good Nurse.