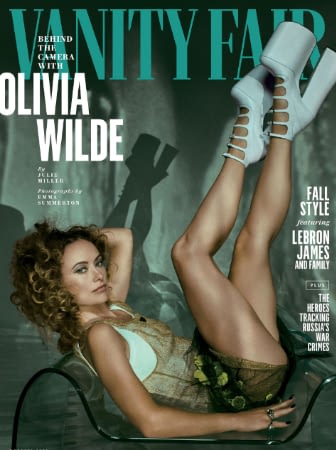 -It’s the profile everyone’s been waiting on: Olivia Wilde covers the new issue of Vanity Fair. They managed to rework the online edition with some new quotes post-Venice, including, “We worked too hard, and went through too much together, to be derailed by something that really has nothing to do with filmmaking.” Otherwise, it’s pretty much an unfettered opportunity to tell her side of the story and she doesn’t shy away from addressing most of the controversies that have popped up in the last few weeks — even if her explanations don’t always line up with what we know. She comments on her relationship timeline (“The complete horseshit idea that I left Jason for Harry is completely inaccurate. Our relationship was over long before I met Harry. Like any relationship that ends, it doesn’t end overnight”), doubles down on her insistence that she fired Shia LaBeouf and says the video he shared of her begging him to stay was recorded *before* Florence Pugh complained about him (“This issue is so much more nuanced than can be explained in private texts released out of context. All I’ll say is he was replaced, and there was no going forward with him. I wish him the best in his recovery”), and addresses the rumours that she was so distracted by her new relationship with Styles that the cinematographer had to step in to direct some scenes (“The idea that I had five seconds in the day to be distracted by anything is laughable”). She also waves away Pugh’s evident lack of desire to promote the movie (“Florence is one of the most in-demand actresses in the universe. She’s on set on Dune. I gather that some people expect for her to be engaging more on social media. I didn’t hire her to post. I hired her to act”). She’s in a damned if you do/damned if you don’t situation right now, but I’m glad she at least attempted to do some damage control, even if it doesn’t fully work.

-Meanwhile, Harry Styles joked during last night’s concert: “I just popped very quickly to Venice to spit on Chris Pine.” No matter what happened or why, this was an incredible pivot and managed to distract everyone from the Wilde/Pugh tensions for a whole day.

-The royal family rushed to the Queen at Balmoral, Scotland before her death, including Prince William and Prince Charles, but Prince Harry reportedly didn’t make it in time.

-It’s really weird to see Charles’ statement come from “His Majesty the King.” It also means that Katherine will likely be the Princess of Wales.

-A double rainbow was seen outside of Buckingham Palace after the announcement about the Queen’s health.  I think the monarchy has destroyed many people and cultures and they should retire it immediately, but it does feel sad/surreal that a constant in our lives is suddenly gone.

–Selma Blair has joined the cast of Dancing With The Stars amid her ongoing battle with MS.

–Zac Efron says his training to get into Baywatch shape left him depressed: “I started to develop insomnia, and I fell into a pretty bad depression, for a long time…That Baywatch look, I don’t know if that’s really attainable. There’s just too little water in the skin. Like, it’s fake; it looks CGI’d. And that required Lasix, powerful diuretics, to achieve. So I don’t need to do that. I much prefer to have an extra, you know, two to three percent body fat.” Two to three percent!??!? Oh honey, no.

–Cara Delevingne showed up at the airport to board Jay Z’s private jet with dirty bare feet.

–Daniel Radcliffe and Weird Al Yankovic are profiled in the New York Times. Their movie opens Midnight Madness at TIFF tonight, so we should be hearing first reactions soon.

-Speaking of highly anticipated reactions to a movie, it looks like the Venice premiere of Ana de Armas‘ Marilyn Monroe movie will split audiences. It got a long standing ovation in Venice, but most reviews are commenting on how absolutely brutal and degrading the NC-17 Netflix film is, with THR comparing it to a snuff movie.

-Are Shailene Woodley and Ansel Elgort dating? They’ve been friends since The Fault In Our Stars so maybe they’re just hanging, but he shared a photo dump on IG and the first and last pic featured her at intimate-looking dinners.

-In the trailer for Peacock’s upcoming romcom Meet Cute, Kaley Cuoco time-travels to turn Pete Davidson into her perfect man.

–Chloë Grace Moretz is also travelling through time in the trailer for The Peripheral.

–Daniel Craig‘s Detective Benoit Blanc is back in the first trailer for Rian Johnson’s Glass Onion: A Knives Out Mystery. I know Netflix paid a boatload of money for this, but it’s a shame it will be streaming only because I think a bunch of people would have gone to the movies to see this one.