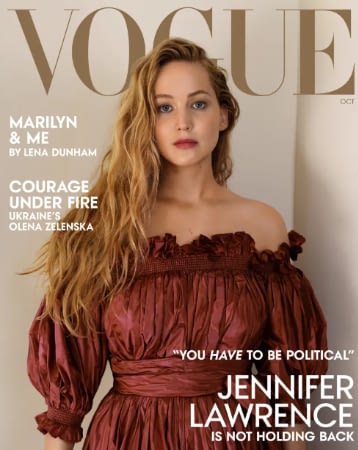 –Jennifer Lawrence is on the latest issue of Vogue (with a horrible cover. Why is the lighting so bad? It looks like it was taken in the corner of an unpacked guest bedroom). In the interview, she talks about having her son (“The morning after I gave birth, I felt like my whole life had started over. Like, ‘Now is day one of my life.’ I just stared. I was just so in love”), an unwanted pregnancy in her early 20s (“I had a miscarriage alone in Montreal”), and how the 2016 election caused a rift in her family (“I just worked so hard in the last five years to forgive my dad and my family and try to understand: ‘It’s different. The information they are getting is different. Their life is different.’ I’ve tried to get over it and I really can’t. I can’t. I’m sorry I’m just unleashing, but I can’t fuck with people who aren’t political anymore. You live in the United States of America. You have to be political. It’s too dire. Politics are killing people”).

-Whew, the Don’t Worry Darling drama reached new levels of pettiness in Venice. Minutes after Olivia Wilde was asked why Florence Pugh wasn’t at the Venice press conference, Pugh was sighted arriving in Venice and enjoying an aperol spritz. When she went to the premiere, she and Wilde didn’t interact, and the film’s 4-min standing ovation got cut short when “Pugh made her way for the exit about three minutes into the clapping.” Pugh’s stylist also made a dig at Wilde.  Twitter seems to be applauding Pugh for all this but to me it seems…not great? Yes, Wilde has made some big P.R. missteps like claiming she fired Shia LaBeouf (especially knowing that video of her begging him to come back could resurface), but I can’t help remembering a lot of the hate surrounding her has been fueled — and continues to be — by Harry Styles stans angry that they’re dating.

-Also, Harry Styles denied spitting on Chris Pine at the premiere. I don’t know — this video makes it clear that Pine is reacting to *something* that landed on him, and it sure looks like Styles geared up to hock one. This video doesn’t look like he spit, though.

-Meanwhile, the reviews for the film are not great — though Pugh and Chris Pine‘s performances are being praised.

-I’m seeing The Whale next week at TIFF and am already bracing myself for the fat suit crap, but I am glad that Brandon Fraser is getting his flowers. Him getting teary during his 6-minute standing ovation at Venice made me teary.

–Tom Cruise said “See you at the movies” while hanging off a nose-diving plane thousands of feet in the air. Your move, Kidman!

–Meghan Markle and Prince Harry took the stage at the One Young World Summit in Manchester.

–Taylor Hawkins‘ 16-year-old son, Shane, did an amazing job filling in on the drums for Foo Fighters‘ performance of “My Hero.”

-NCIS star Pauley Perrette revealed she had a “massive stroke” a year ago and is “so grateful” that she’s “still here.”

–Jane Fonda has revealed she is battling “very treatable” form of non-Hodgkin’s lymphoma.

-Despite getting good reviews from real critics, Amazon’s new Lord of the Rings series is getting “review bombed” from online trolls who are whining about the show’s diversity.

–Olivia Colman and Micheal Ward star in the trailer for Empire of Light.