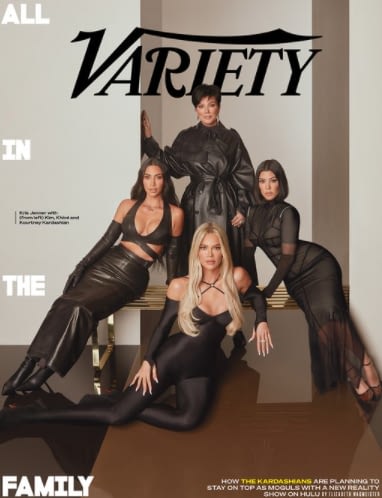 –Variety’s new cover story is a pretty frank look at the business side of the Kardashians, as we’re about to see if they can replicate their E! reality show success on Hulu. Kim says the new show will detail how she and Pete Davidson met (“who reached out to who and how it happened and all the details that everyone wants to know…I’m definitely open to talking, and I definitely explain it”) but she isn’t sure if he’ll ever appear on their new show (“I’m not opposed to it. It’s just not what he does. But if there was an event happening and he was there, he wouldn’t tell the cameras to get away”).

-Meanwhile, the behind-the-scenes video features this clip of Kim saying, ““I have the best advice for women in business. Get your f-cking ass up and work. It seems like nobody wants to work these days.” It is not going over well.

–Kanye West has reportedly hired a Hollywood Unlocked’s blogger as his ‘media manager‘. This is the guy who just two weeks ago insisted the Queen had died, right?

-The new trailer for Bridgerton season 2 is excellent. (Even though it looks like the show is leaning into a love triangle, Kanthony fans know better). My fave thing about this trailer is how many homages the show seems to be paying to the film versions of Pride and Prejudice. We have the hand graze (ala Matthew Macfadyen‘s Darcy, the see-through white shirt ala Colin Firth‘s Darcy, etc.).

–Kelly Clarkson‘s messy divorce is finally settled. She’ll pay her ex a lump sum of $1.3 million, along with child support of $45k/month.

-Jfc. Black Panther director Ryan Coogler was detained by police after he was mistaken for a bank robber when he tried to withdraw $12k from his account.

–Dylan O’Brien confirms he won’t be in the Teen Wolf movie.

-When it comes to her Oscars hosting plan, Amy Schumer says she’ll push the envelope and likely take “a couple risks” — if she’s allowed. “I emailed my lawyer about two jokes the other day, and he was like, ‘No!'” (Isn’t there a whole writers room for this thing, though?)

-Oh hells yes! André Braugher is joining the cast of The Good Fight.

-Now that The Batman proved that everyone is ready to go back to the theatre (are we though??), Warner Bros just re-established a 45-day theatrical window for their big films this year.

-The Batman spinoff series The Penguin is officially going ahead at HBO Max. I don’t understand hiring Colin Farrell to do a TV series if you’re going to bury him under prosthetics.

–Jennifer Garner and Mark Ruffalo continue to give us the content we want. This image just sold me on The Adam Project.

-Glad to see the reviews for the second season of Upload are good.