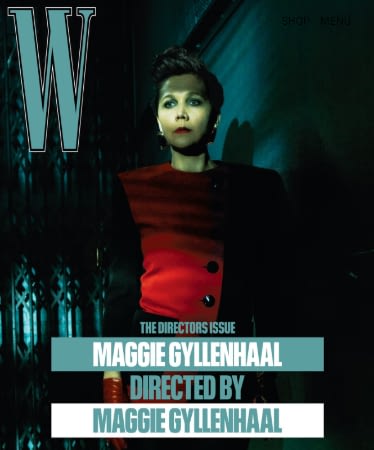 -The Lost Daughter is one of the few Oscar noms that feels like it’s been widely seen (the Netflix effect, I guess). The film’s helmer Maggie Gyllenhaal covers W magazine’s Directors Issue, and talks about the choices she made in adapting Elena Ferrante‘s novel. “The challenge of the book was very much like breaking a scene down as an actor. You have a text and you’re like, Okay, these are the words, but what is the underlying, more interesting event of the scene, and how can you articulate that cinematically without ever saying it out loud?” (The accompanying noir-inspired photo shoot includes her husband, Peter Sarsgaard.)

-Hurray for Kim Kardashian, who is now legally single one year after filing for divorce from Kanye West.

-Euphoria star Sydney Sweeney is engaged to her boyfriend of 3 years, restaurateur Jonathan Davino. (Also, this article made me realize that she played Nick’s wife on The Handmaid’s Tale and my mind is blown.)

-Speaking of Sweeney, I’m surprised she’s not in the running to play Madonna in the upcoming biopic. Instead, her Euphoria costar Alexa Demie is, along with Julia Garner, Florence Pugh, Odessa Young, Emma Laird, Bebe Rexha and Sky Ferreira. According to THR, some hopefuls are even participating in 11-hour choreography sessions called “Madonna bootcamp“.

-I won’t be convinced that Jason Momoa and Lisa Bonet have reunited until People reports it, but I understand the excitement surrounding the rumours.

–Sean Penn says he “walked miles to the Polish border after abandoning our car on the side of the road” while filming a documentary for Vice on Russia’s invasion of Ukraine.

-I wish this sketch about white dudes who podcast wasn’t cut from John Mulaney‘s SNL episode.

–Jennifer Garner and Mark Ruffalo are back together and playing a couple in Netflix’s The Adam Project, and on the press tour they said they are open to a 13 Going on 30 sequel. God, yes!

–Lindsay Lohan has teamed with Netflix for two more movies, which bodes well for the holiday one she just shot.

–Marilyn Manson is suing his former fiancée Evan Rachel Wood and the artist Illma Gore, accusing them of concocting an elaborate ‘conspiracy’ to cast him as ‘a rapist and abuser.’

-Netflix announced a new documentary about Pamela Anderson, already in production for several years, in which she is “setting the record straight as she looks back on her professional path and her personal journey.” I’m glad she gets to tell her story after Pam & Tommy tried to do it for her.

-So it seems like the controversial changes the Oscars are making this year, including presenting eight Oscar categories differently than the other 15, were pushed by ABC, not the Academy.

-It’ll be interesting to see if Disney+ cleans up the Netflix Marvel shows before they stream them. Disney bumped Love, Victor to Hulu because it was too risqué for their platform, so I can’t imagine them being cool with the bed-breaking sex scene between Jessica Jones and Luke Cage.

-I really liked this piece about Better Things’ final season and what made the show so special. I don’t know if I’ve ever seen another series that’s so loose and immersive, but this sums it up perfectly: “A person doesn’t watch the show so much as drop by Sam’s big cozy house for a visit.”

-Here’s the first full Bullet Train trailer, in which Brad Pitt leads an ensemble cast of assassins made up of Bad Bunny, Joey King, Hiroyuki Sanada, Michael Shannon, and more.