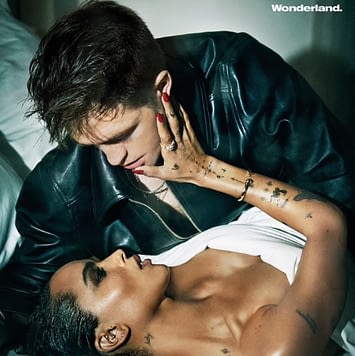 -It’s the weekend of The Batman, and Robert Pattinson and Zoe Kravitz‘s promo blitz continues with a Wonderland photo spread (which is super hot, but why is she naked and he’s fully clothed?).

-If you’re seeing the movie this weekend, there is no post-credits scene.

-The Boys actor Antony Starr (who plays Homelander) was arrested this week in Spain, reportedly for punching a young chef while inebriated at a pub in Alicante. Shattered glass was involved, and the chef required stitches.

-In her NYT profile, Julia Fox says she lost weight while dating Kanye West for 6 weeks because of how hectic her live got. “It just wasn’t sustainable. I lost, like, 15 pounds in that month…I tried my best to make it work. I already had a jam-packed life. How do I fit this really big personality into this already full life?”

-Bridgerton’s new season will once again feature orchestral covers of top hits. This year’s crop will include Madonna‘s “Material Girl,” Rihanna‘s “Diamonds,” Alanis Morissette‘s “You Oughta Know,” Miley Cyrus‘ “Wrecking Ball — and the one that they had the hardest time to license: Harry Styles‘ “Sign of the Times.”

-The Academy infighting over the Oscars telecast is reportedly growing.

-This feature on Fire Island, a new film that’s a gay adaptation of Pride & Prejudice starring Booster, Bowen Yang, Conrad Ricamora, Matt Rogers, and Margaret Cho, has me so hyped!

-Fantasy author Brandon Sanderson raised $15.4 million in 24 hours to self-publish four new books  His original Kickstarter goal was $1M, which he blew past in 35 minutes.

-The Dropout, the new scam show starring Amanda Seyfried as Elizabeth Holmes, is getting great reviews.

-Speaking of new TV shows, it feels like this month is bursting with debuts. We’re getting Netflix’s Pieces of Her with Toni Collette, HBO’s Minx with Jake Johnson, Hulu’s Fresh with Sebastian Stan and Daisy Edgar-Jones, Apple’s We Crashed with Anne Hathaway and Jared Leto, Prime’s The Tourist with Jamie Dornan, Starz’s Shining Vale with Courteney Cox, plus the new seasons of Upload, Bridgerton, and Atlanta. Whew!

–Colin Farrell‘s story about how easily distracted Terrence Malick can be when directing is great.

–Demi Lovato will no longer star in the upcoming NBC series Hungry, though they and their manager Scooter Braun remain executive producers on the project.

-This made my day: New Kids On The Block dropped a nostalgic music video featuring Salt-N-Pepa, Rick Astley, and En Vogue.

-Here’s a video of Sebastian Stan dancing his ass off in a kitchen, cause we all survived this week and deserve it.