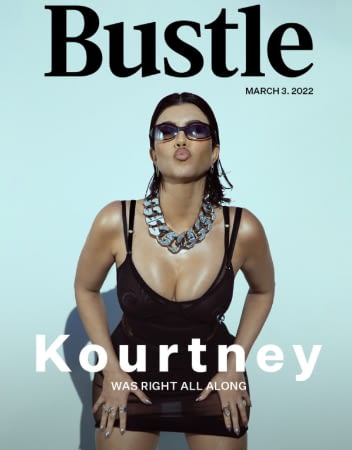 -For Bustle’s March cover story, Kourtney Kardashian talks about Travis Barker, starting Poosh, setting boundaries for things like “rest” with her driven family, and finally being happy. “I see the growth that comes from those unhappy places which make it all worth it. I’m like, ‘If we didn’t go through these roller coasters, you wouldn’t get to the good part.'”

-I know I say this every week, but Kanye West‘s behavior continues to be scary and no one seems to be doing anything about it. Today he released an alarming video for his song “Eazy,” featuring a claymation version of Pete Davidson being kidnapped, tied up, and buried alive. Claymation is hard — dozens if not hundreds of people would have worked on this video. And no one stopped to say “Um, are we maybe crossing a line here?”

-A TikToker explained those bizarre designer giveaways the Kardashians are always doing on their Instagram, which seem totally off-brand. They’re reportedly making $1.8 million on the latest one, which is very on-brand.

-I feel like 87% of The Batman’s marketing is relying on Robert Pattinson and Zoe Kravitz’s chemistry, and I don’t hate it.

–Robert Pattinson admits to spending time anonymously responding to comments on online message boards. “It’s extremely helpful to have these fan theories. I used to look at a lot of the forum stuff and it actually really did inform my character a lot. Still look at it nowadays… I generally lurk. Sometimes I get pushed a little far and I have to respond.”

–Paul Dano says his Riddler would play Wordle: “That actually was very important to my backstory … puzzles were the only place that he would be given any form of positive feedback … They were the only thing that ever said to him in his whole life, you win.”

-Bridgerton’s Charithra Chandran deactivated her Twitter account because Kanthony fans were being terrible to her. Not only should actors not have to deal with hate for their characters, but this doesn’t even make sense because her character in the book is great! The supposed “love triangle” doesn’t ever really materialize.

-The Shanna Moakler saga continues to grow complicated. A week after her ex-boyfriend Matthew Rondeau was arrested for felony domestic violence after an altercation at her house, she says she took a pregnancy test and it’s positive.

–Skylar Astin already has a post-Playlist gig lined up; he is headed to Grey’s Anatomy.

-This is a cute video with Sarah Jessica Parker looking back at her fashion evolution.

–Colin Farrell is the latest celeb to eat spicy wings on Hot Ones.

-Speaking of Colin Farrell, his new movie After Yang is getting raves, and not just for this incredible opening dance sequence.

–Adam Scott posted the first pic from the Party Down revival and I missed these pink bowtied nerds so much!

-The trailer for Jake Johnson‘s new HBO show Minx is working for me.

–Chris Pine and Thandiwe Newton star in the trailer for the sexy new spy thriller All the Old Knives.