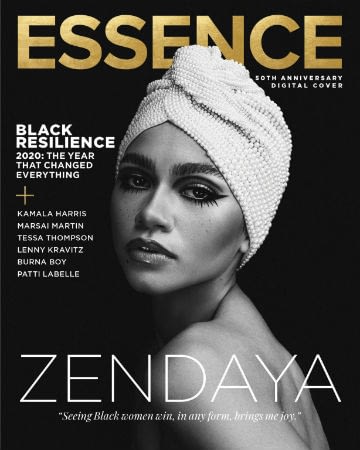 –Zendaya is stunning on the new cover of Essence. In the interview, which took place a week after her Emmy win, she talks about accepting the award at home surrounded by her family (“I was worried that if they kept screaming for too long, I wouldn’t have any time to actually say anything —but I didn’t want to stop them, because they were having a great time. It was a very special night”), and her hopes for Black women (“For us to continue to fully realize our power and harness it to do great things, because we are incredibly powerful. We’re often convinced that we’re not and taught to shrink —but we have to believe in our collective power. I always think of that Beyoncé song, “They’ll never take my power, my power, my power.” Let’s take that energy into the new year”).

–Joaquin Phoenix showed up in Burlington, Ont to pay tribute to activist Regan Russell, who was killed earlier this year outside a slaughterhouse.

–Halle Barry and her stylist Lindsay Flores discussed their first orgasm, and Barry was surprised Flores couldn’t remember hers. “Well it wasn’t recently!”

–Brad Pitt has been volunteering since the summer and has handed out the food boxes to families around 30 times. And he’s looked mighty fine while doing it. That photo of him with his legs crossed having a smoke is … a lot.

-TikTok Star Charli D’Amelio lost 1 million followers in 24 hours because her family posted a video of a dinner with James Charles, which included a bit in which she bemoaned the fact that she only had 95 million followers on her year anniversary of her reaching 1 million followers. Charles snarkily responded “Was the 95 not enough for you?”

–Justin Bieber and Shawn Mendes’ long-rumoured collaboration has finally arrived — and while I was hoping for something a lot more danceable, it’s a low-key bop!

-A six-part docuseries following Nicki Minaj’s rise all the way to motherhood is coming to HBO Max.

-Marvel Studios, along with Ryan Reynolds, hired Bob’s Burgers writers and exec producers Wendy Molyneux and Lizzie Molyneux-Loeglin to write the third Deadpool film. Love that for them!

–Sia is getting heat from the disabled community for the Magic trailer. She is not handling it well.

-This is an interesting look at how Gina Carano’s recent social media postings have alienated some Mandalorian fans.

-I didn’t even know they were still making episodes of Wipeout, but a contestant just died during filming after going into cardiac arrest following the completion of an obstacle course.

-I’ve only watched a few episodes of Supernatural, but I’m seeing a lot of chatter on Twitter today about the show ending it’s 15-season run(!) in a way that some fans didn’t love. I’m really hating this trend to lean into man-pain. You don’t need to guarantee a happy ending when you wrap a show, but you should aim to give fans a satisfying conclusion — even if you’re fanbase isn’t who you wanted it to be.

-It also sounds like their penultimate episode fell into the “bury your gays” trope.

–Robert Englund of Freddy Krueger fame has joined the cast of Stranger Things.

-Netflix dropped the first trailer for Robert Rodriguez’s We Can Be Heroes, starring Pedro Pascal and Priyanka Chopra.

Tom Hiddleston Strips Down To His Underwear For W