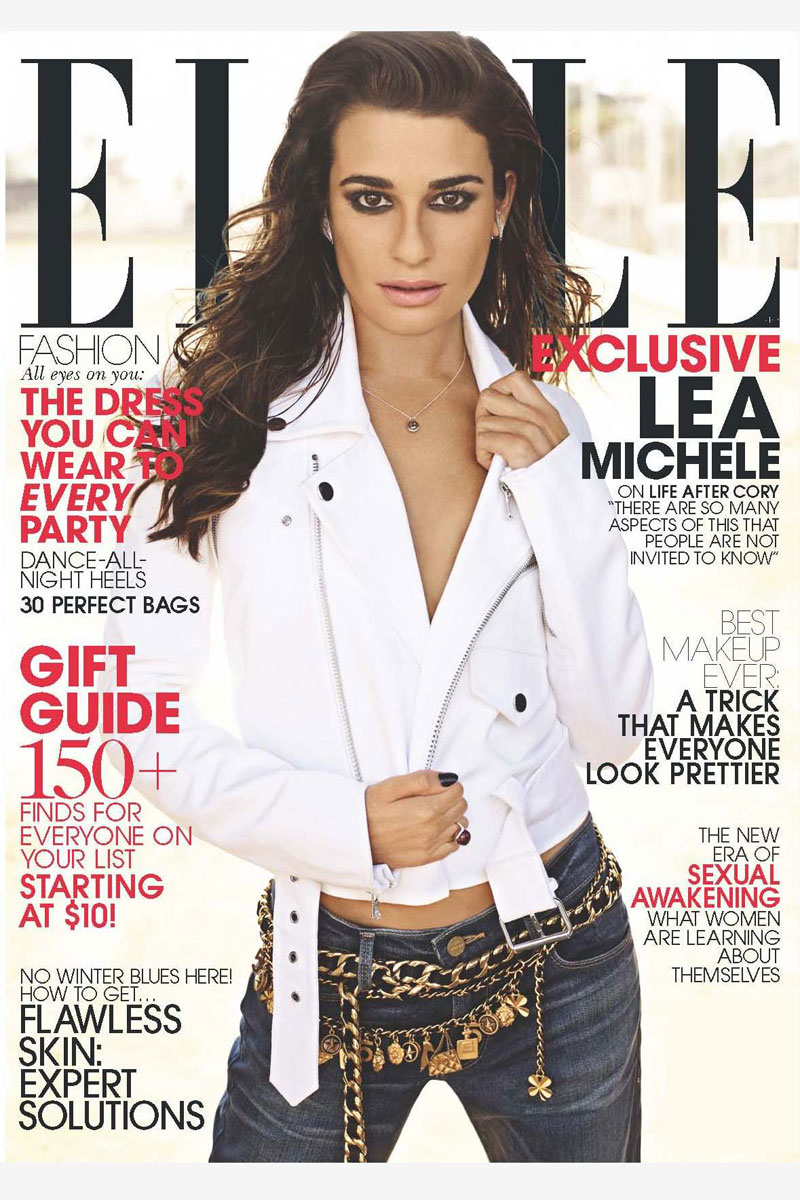 -Sad read: Lea Michele discusses the loss of Cory Monteith in the latest issue of Elle, where she reveals that Kate Hudson took her in following his death.

-Whoa. Is Idris Elba going to be a new dad?

-In other baby news, Gwen Stefani looks even more glow-y than usual.

–Chris Kirkptatrick got married this weekend and forced all his fellow N’Syncers (including Justin Timberlake) to wear a cheap rented tux from Men’s Warehouse. I love everything about this story so much!

–Justin Bieber was reportedly spotted attempting to sneak out of a Brazilian brothel. Classy.

-Make yourself feel better about your life by watching this video of Justin getting hit by a water bottle.

-The first ever YouTube Awards were a mess (and I’m not just talking about Lady Gaga’s teeth), but I did enjoy the Spike Jonze-directed “live music video” for Arcade Fire‘s “Afterlife” (my favourite song on the new album).  Ok, Greta Gerwig. You’re forgiven for Frances Ha…barely.

–Blake Lively says she doesn’t work out, and still eats a lot of chocolate. Just in case you forgot to hate her today.

-I could watch clips of Tom Hiddleston dancing all day. Luckily, he seems up for accommodating that.

-The Simpsons bid farewell to Mrs. Krabappel with a heartbreaking chalkboard gag.

–Pippa Middleton may be engaged.

-Did you know that Dolly Parton is Miley Cyrus’s godmother? Parton says she’s going to “let her go and do her own thing.”

-If Dolly changes her mind and decides to impart some wisdom on young Miley, maybe she should start by warning her not to hook up with Benji Madden from Good Charlotte.

-Community’s Alison Brie and Danny Pudi are having fun with Vine.

-Speaking of Community, this is random but awesome: Breaking Bad creator Vince Gilligan will guest star on the sitcom.

–Ryan Gosling and Eva Mendes are denying rumours that they split (possibly over wanting babies).

–Benedict Cumberbatch dared to do a Chewbacca impression in front of Harrison Ford and lived to tell the tale.

-This interview with Patti LaBelle is everything. I love how she answers most of Oprah’s questions with “what?!” which seems to translate into “b*tch, please!”

-Don’t compare David Cronenberg to Stanley Kubrick. He won’t like it.

–KStew‘s a busy lady. She also signed on for a new indie flick called Anesthesia.

-Expectant couple Olivia Wilde and Jason Sudeikis broke out the PDA at a Lakers game.

-Also indulging in a little courtside lovin’ was Mary-Kate Olsen and Olivier Sarkozy, who will never not be gross.

-I’m really looking forward to Inside Llewyn Davis, and if the now-streaming soundtrack is any indication, it’s going to be lovely.

–Dustin Hoffman interviews Claire Danes in the new issue of Interview. It doesn’t sound like she wants years of Homeland ahead of her (though given how people were hating on this season even before this week’s stupid twist, she may not have to worry about it much longer.)

–Kerry Washington was fantastic on this weekend’s SNL. That might be the first opening sketch I haven’t fast-forwarded through in years.

–Eminem did not fare so well. His rep is denying reports he lip-synched his SNL performances.

-I didn’t really need to be told that Terry Richardson is a pervert, but good on the New York Post for writing about it anyway.

-This reunion pic of the Everwood cast is adorable!

-There was also a mini Twilight reunion this weekend.

-Uh oh. Is Josh Brolin up to his old tricks?

-Speaking of Josh, here’s the latest trailer for Labor Day. People I know who saw it at TIFF said they couldn’t figure out if it was trying to be a thriller or a romance, and this trailer seems to confirm that.

Tatiana Maslany Gets Cloned on EW

Zendaya Is Stunning In InStyle