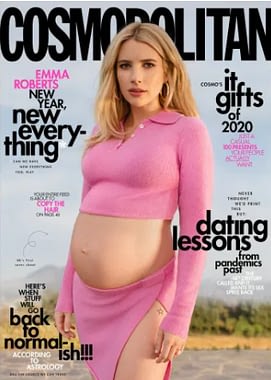 –Emma Roberts is Cosmo’s first-ever pregnant cover star. She talks about getting older (“It’s funny, because I think people to this day think I’m 19, even though I’m turning 30. I don’t know if it’s about growing up as Julia Roberts’ niece or if it’s because I’ve been doing this since I was so young that people see me as younger”), dealing with endometriosis (“I started opening up to other women, and all of a sudden, there was a new world of conversation about endometriosis, infertility, miscarriages, fear of having kids. I was so grateful to find out I was not alone in this. I hadn’t done anything ‘wrong’ after all”) and expecting during a pandemic (“Long story short: I am hungry and tired. Food and sleep do not abide by the normal laws when you’re pregnant. But I’m healthy, which is the thing I’m most grateful for”).

-In Allure’s cover story with Pharrell Williams, he talks about working on Rihanna‘s upcoming ninth album and he makes it sound like it’s actually happening and imminent! He gushed, “Rih is in a different place right now. Like, wow. She’s from a different world.”

–Dominic West’s publicist continues to flail. This is getting beyond embarrassing.

-While promoting her new Hulu show, Kate Mara talked about that time she was in a superhero movie. “I had a horrible experience on Fantastic Four. I’ve never talked about it before. I married one of my costars [Jamie Bell], so I don’t regret doing that movie at all. But do I wish I had responded differently to certain things? Yes, definitely…The fact of the matter is that my two horrendous experiences with directors were male directors…And on both of my bad experiences, the movies were 95 percent men and I was the only woman in the movie.”

-The CMAs happened last night. I didn’t watch, but it sounds like it didn’t come off as very covid-safe.

–The Weeknd has been chosen to perform the halftime show at the Super Bowl. Huh.

-Good on Blake Lively for appearing on a podcast dedicated to A Simple Favor (which is on Amazon Prime and is so, so good).

-Disney+ has moved its debut of Wanda Vision to January 2021. That means this is the first year without a new Marvel release since 2010.

-The Buffy cast has weighed in on Stacey Abrams’s Spike theory (which I disagree with, but love that she’s tweeting about it).

–Oprah Winfrey and Brad Pitt are teaming up to adapt The Water Dancer, the best-selling novel by Ta-Nehisi Coates.

–Sia and Maddie Ziegler are teaming up once again for a new song called “Hey Boy”.

–Blackpink has decided to postpone their reality series after photos of members of the K-pop group holding a pink panda sparked outrage.

-HBO Max’s Friends reunion will supposedly start shooting in March. Who still even wants this?

–Bruce Willis and Rachel Nichols search for a new home in the Breach trailer.