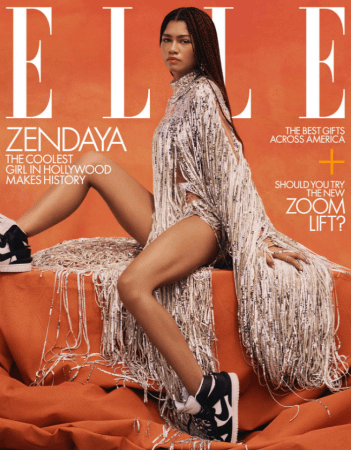 -I have extreme sneaker envy over Zendaya’s Elle cover. She’s interviewed by Dune costar Timothée Chalamet so the article itself is as substantial as cotton candy, but the photo spread is excellent.

-I’m trying so hard to get back into The Crown because I love Gillian Anderson, but man, that season premiere felt like it was 47 hours. Emma Corrin is great as Diana though. She covers the new issue of British GQ.

-Relationship shocker: Olivia Wilde and Jason Sudeikis have split after being engaged for more than 7 years.

–Jason Momoa was spotted shopping at Cosmos Records in Toronto, which is great and all but why the hell is he not wearing a mask while inside a store?!

-Man, Chris Evans is keeping us fed lately on social. He and Olympian gymnast Aly Raisman posted about hosting a play date for their rescue dogs.

–Jennifer Garner listed the 10 things she can’t live without and I love that for the most part, they’re all inexpensive, normal people things.

-The CW is doing a Jane Austen anthology series based on her books, which led to a Jezebel headline that I heartily endorse: “The Time Has Come to Let Lizzy Bennet Fuck”

-After months and months of John Oliver lusting after him, Adam Driver appeared on his show to ask “What the f**k are you doing?” He (fake) ranted “This bit? This bit, this thing you’ve been doing that’s either sexual or violent? This strange, strange bit that for some reason you’ve pulled me into? What is it? When you first started doing it, it was easy for me to shrug it off. But then it kept going on, and on, and on, and on… Do you realize, over this past year, what you’ve asked me to do to you? ‘Collapse on your chest.’ ‘Tie your fingers in a square knot.’ ‘Step on your throat.’ ‘Shatter your knees.’ ‘Pull your heart out through your ear.’ What’s wrong with you? You realize we’re strangers, right? I don’t know you. And now, random people on the internet stan us, claiming that you thirsting over me is a mood.” I love them both so much.

–David Fincher says he’s developing a miniseries about “cancel culture” and I just let out the longgggggest sigh.

–Jack Black did the WAP dance on TikTok, to glowing reviews.

-Netflix’s Dash and Lily is an underrated holiday gem, if you’re looking for a quick binge.

–Meryl Streep takes Candice Bergen, Dianne Wiest, and Lucas Hedges on a girls trip in the trailer for HBO Max’s Let Them All Talk.