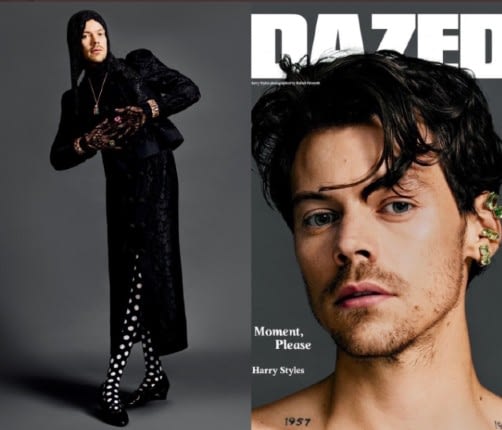 –Harry Styles covers the winter issue of Dazed and the photo shoot is worth a look. He talks about branching out into acting (“You’re trying to remove a lot of yourself and key into someone else. On the most basic level, it’s like being a kid and you’re playing pretend. I am not a very confrontational person, I think I’m pretty chill, so then when you have a character who is like that, it’s fun to explore”), and his new line of beauty products (“It’s starting with nail polish, because that was kind of the birth of what it was for. Me seeing a colour on a flower or a wallpaper or something and thinking, ‘Oh, I wanna put that on my nails.’ It was a fun little project, but during the pandemic, and when we eventually named it Pleasing, it felt like it was so much more than nail polish”).

-It’s Taylor Swift‘s world; we’re just living in it. On Friday night, she debuted her short film for “All Too Well” starring Stranger Things’ Sadie Sink and Teen Wolf’s Dylan O’Brien, and on SNL she performed an epic 10-minute version of the song with the film playing behind her. Then today, she dropped the music video for “I Bet You Think About Me“, which marks Blake Lively‘s directorial debut and stars (for some reason) Miles Teller.

–Jake Gyllenhaal was spotted out with his sister Maggie this weekend, so Taylor fans are letting him live (barely).

-Is Shia LaBeouf about to become a father? Following allegations of abuse levelled against him by ex-girlfriend FKA twigs, he reportedly got back with his ex-wife, actress Mia Goth. And now it looks like they’re expecting.

–Kristen Stewart is developing a gay ghost-hunting reality show with a friend, which she has described as “a paranormal romp in a queer space,” with elevated aesthetics. This sounds like the reality TV version of her film Personal Shopper and I’m in.

-Love this profile on Succession’s J. Smith-Cameron (and it explains her recent tweet about having “the greatest first date”).

-From divorce to weight loss, Adele didn’t hold back details in her tell-all interview with Oprah last night on CBS.

-Meanwhile, I don’t usually like public proposals but the one during her special was great, especially because the woman’s shock extended when she was told to sit down and they put her next to Lizzo and then Melissa McCarthy handed her a drink.

-Last week’s Disney+ Day was a mess. The biggest miss is how they put most of the trailers behind a paywall so they couldn’t be shared on social. (Also, the fact that they forgot to untag all the previously mentioned celebs in their Twitter thread made my social media manager heart hurt.) But some trailers have started to trickle out, including Oscar Isaac doing an awful accent in Moon Knight, and Iman Vellani making her debut as Ms. Marvel.

–Serena and Venus Williams brought the drama to the premiere of King Richard (which I saw this weekend and am still undecided on.)

–Lin-Manuel Miranda is promoting Tick Tick Boom (which I also saw this weekend and loved) and says he’s not worried about so-called “cancel culture.” “Once something has success, you’re not the underdog trying to make it happen anymore. You have to graduate past the mindset of, like, it’s a miracle I got something on the stage. Because now that is expected of me. And people go, ‘Yeah, but what about this? And what about this?’ And that’s fair! I do that with art I find lacking…It’s not cancellation. That’s having opinions. So I try to take it in that spirit.”

-The teaser trailer for Downton Abbey: A New Era has arrived.

-Here’s the trailer for Silent Night, starring Keira Knightley and Matthew Goode. I saw this at TIFF and it straddles a really hard line between dark comedy and massively depressing doomsday drama. –Zendaya is stunning on the new cover of Essence. In the interview, which took place a week after her Emmy win, she talks about accepting the award at home surrounded by her family (“I was worried that if they kept screaming for too long, I wouldn’t have any time to actually say anything —but I didn’t want to stop them, because they were having a great time. It was a very special night”), and her hopes for Black women (“For us to continue to fully realize our power and harness it to do great things, because we are incredibly powerful. We’re often convinced that we’re not and taught to shrink —but we have to believe in our collective power. I always think of that Beyoncé song, “They’ll never take my power, my power, my power.” Let’s take that energy into the new year”).

–Joaquin Phoenix showed up in Burlington, Ont to pay tribute to activist Regan Russell, who was killed earlier this year outside a slaughterhouse.

–Halle Barry and her stylist Lindsay Flores discussed their first orgasm, and Barry was surprised Flores couldn’t remember hers. “Well it wasn’t recently!”

–Brad Pitt has been volunteering since the summer and has handed out the food boxes to families around 30 times. And he’s looked mighty fine while doing it. That photo of him with his legs crossed having a smoke is … a lot.

-TikTok Star Charli D’Amelio lost 1 million followers in 24 hours because her family posted a video of a dinner with James Charles, which included a bit in which she bemoaned the fact that she only had 95 million followers on her year anniversary of her reaching 1 million followers. Charles snarkily responded “Was the 95 not enough for you?”

–Justin Bieber and Shawn Mendes’ long-rumoured collaboration has finally arrived — and while I was hoping for something a lot more danceable, it’s a low-key bop!

-A six-part docuseries following Nicki Minaj’s rise all the way to motherhood is coming to HBO Max.

-Marvel Studios, along with Ryan Reynolds, hired Bob’s Burgers writers and exec producers Wendy Molyneux and Lizzie Molyneux-Loeglin to write the third Deadpool film. Love that for them!

–Sia is getting heat from the disabled community for the Magic trailer. She is not handling it well.

-This is an interesting look at how Gina Carano’s recent social media postings have alienated some Mandalorian fans.

-I didn’t even know they were still making episodes of Wipeout, but a contestant just died during filming after going into cardiac arrest following the completion of an obstacle course.

-I’ve only watched a few episodes of Supernatural, but I’m seeing a lot of chatter on Twitter today about the show ending it’s 15-season run(!) in a way that some fans didn’t love. I’m really hating this trend to lean into man-pain. You don’t need to guarantee a happy ending when you wrap a show, but you should aim to give fans a satisfying conclusion — even if you’re fanbase isn’t who you wanted it to be.

-It also sounds like their penultimate episode fell into the “bury your gays” trope.

–Robert Englund of Freddy Krueger fame has joined the cast of Stranger Things.

-Netflix dropped the first trailer for Robert Rodriguez’s We Can Be Heroes, starring Pedro Pascal and Priyanka Chopra.