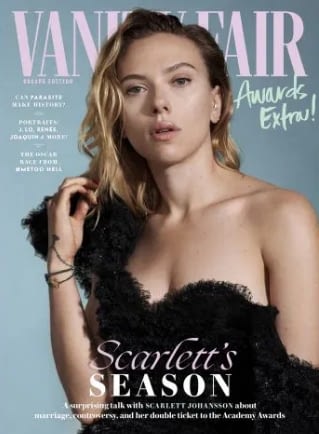 –Scarlett Johansson covers the latest issue of Vanity Fair. She talks about her marriage to Ryan Reynolds (“The first time I got married I was 23 years old. I didn’t really have an understanding of marriage. Maybe I kind of romanticized it, I think, in a way”), her statement over the controversy about her being cast as a transgender man in Rub & Tug (“I was not sensitive, my initial reaction to it…I was uneducated. So I learned a lot through that process. I misjudged that…. It was a hard time. It was like a whirlwind. I felt terribly about it. To feel like you’re kind of tone-deaf to something is not a good feeling”), and her defense of Woody Allen (“I do understand how that is triggering for some people. But just because I believe my friend does not mean that I don’t support women, believe women. I think you have to take it on a case-by-case basis”).

-That Mark McGrath viral video wasn’t a real breakup. But he still took $100 from a fan thinking it was.

-A source close to Justin Timberlake says “Their marriage will survive. He feels guilty and will make it up to [Jessica Biel]” after he was photographed getting too cozy with his costar.  Of course, you would think that if he REALLY felt guilty for all the embarrassment he’s putting his wife through, he wouldn’t have also gotten photographed leaving the same traileras said costar this week. I mean, it’s like he’s not even trying.

–Madonna and Lil Nas X are the celebrity friends I never knew I needed.

-Speaking of celebrity friends, Brad Pitt and Alia Shawkat were spotted together again.

–T.I. says he was talking about his daughter’s hymen in a “joking manner”and his intentions were “terribly misconstrued and misconceived.” Uh huh.

–Channing Tatumfiled a request yesterday that he and Jenna Dewan meet with a counselor once a month to help schedule their time with thier daughter and assist in resolving any of their co-parenting issues.

-Now that they’re feeling bullish on Robert Pattinson‘s The Batman, Warner Bros believe the film’s villains like Riddler, Penguin or Catwoman could headline their own spinoff movies, and are eyeing Michael B. Jordan’s pitch for a Superman movie.

–Gabrielle Union will reportedly not be returning for the next season of America’s Got Talent — reportedly because she spoke outabout “problematic” situations that were taking place behind-the-scenes, including racism, sexism and more.

–Victoria Beckham answered Ellen’s burning questionsand she was super charming and funny. It’s so weird to see her smile but I love it.