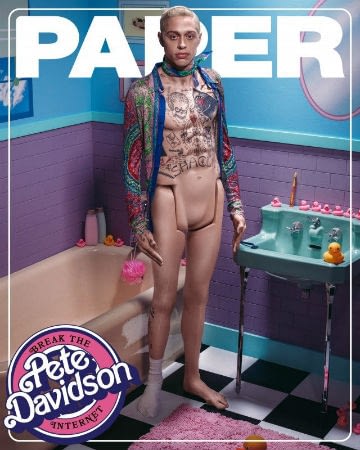 –Pete Davidson is on the cover of Paper’s break the internet issue, in a photo that pokes fun at his BDE and rumoured…uh…endowments.

–RuPaul is on the cover of Vanity Fair, where he says “true drag really will never be mainstream. Because true drag has to do with seeing that this world is an illusion and that everything that you say you are and everything it says that you are on your driver’s licence, it’s all an illusion. Most people will never in their lives understand what that is. Because they don’t have the operating system to understand that duality.” Fair.

-In a surprising display of self-awareness, Scooter Braun calls himself the “bad guy” in his saga with Taylor Swift.

–Jennifer Garner spent 25 minutes looking for her car in a one-level parking garage. “I stopped to tie my shoe [here]…I should be on CSI: Miami” made me LOL.

–Brenda Song (who is in Dollface which just came to Crave and is soooo good) says she was ‘not Asian enough‘ to audition for Crazy Rich Asians. Director Jon M. Chu disagrees.

–Amy Schumer posted a photo of her hanging out with Jennifer Lawrence and Phoebe Waller-Bridge and I’m incandescently jealous.

–Emma Thompson fielded questions from children, who asked her who was her best onscreen kiss (“Meryl Streep’s a very good snogger. I had to snog her in Angels in America and she was method about it”) and what they should spend their pocket money on (“peppermint creams”).

-Buckingham Palace is bracing for an “imminent” summons from US investigators for Prince Andrew to give testimony about Jeffrey Epstein.

-The Independent Spirit Awards nominations are out and The Lighthouse and Uncut Gems are leading the way. Jennifer Lopez also got a best supporting actress nod for Hustlers.

–Amanda Palmer hired a freelancer to travel with her and cover her tour and wrote a whole Twitter thread about it as if she’s the first person to invent PR.

–Riley Keough landing the lead role in the Daisy Jones & The Six adaptation is great casting.

-The Paramount Laws, which prevent movie studios from block-booking features in the theaters they own, may be going away. This is very not good.

-Surprising but good news: Disney actually worked with indigenous Sámi people to make sure that Frozen 2 was culturally sensitive.

-DC has announced its next live-action series, Stargirl. The character will debut during the network’s upcoming superhero crossover event in Dec, and the show will air on The CW the day after episodes debut on DC’s streaming service.

-This is incredibly sad: Spirit of the West frontman John Mann passed away at 57. He was diagnosed with early onset Alzheimer’s Disease when he was 50.

-The paparazzi aren’t always bad. Courteney Cox‘s two dogs were rescued from traffic by a quick-on-his-feet paparazzo who was driving by.

-Love seeing the raves for Adam Driver‘s new movie The Report. Saw it at TIFF and it’s stuck with me.

-I will take any new Jane Austen adaptation you can give me thank you very much.