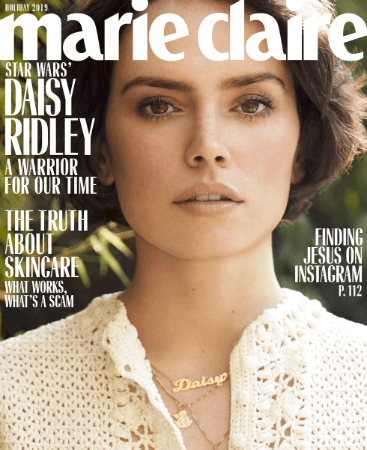 -In her Marie Claire cover story, Daisy Ridley discusses the emotional toll her Star Wars fame has had on her family (“It’s super invasive. We went to a wedding recently, and it was uncomfortable for me because people were really rude. They don’t act like normal human beings. And then, not only did I not have a good time, but then my mum was upset and then my sisters are upset. So it’s tricky”), and declines to address rumours she’s engaged (“It’s a really nice ring that I wear. Oh my God. It’s the first time I’ve publicly been asked this…The thing is, I’ve never talked about my personal life. So I won’t talk about it now”).

–Shawn Mendes and Camila Cabello had a smoochy good time at the Raptors game last night.

-The reviews are out for Charlie’s Angels, which opens this weekend, and most are positive — especially about Kristen Stewart’s performance.

-I’ve been trying to figure out which dress in this photo I hate the most and I honesty can’t decide? They’re all so bad, but Jennifer Garner‘s pulls ahead just slightly IMO.

-The Cats movie is delayed and may miss some award consideration. If it doesn’t hit the Golden Globes deadline, what was even the point?

-Also, for some inexplicable reason, the Golden Globes has decided to bring back Ricky Gervais to host.

–Adam Devine says everyone always confuses him with Adam Levine. I’m sorry, but he wishes.

-The entire cast of Days of Our Lives has been released from their contracts and production has halted indefinitely. It shoots a ridiculous 8 months in advance (compared to other soaps, which are usually 1-2 months) so the show will still have enough episodes to run until summer and fix their weird delay. But the fear is that if the show does end up getting renewed next year, Corday Productions will be able to offer the actors new contacts at a reduced rate. Shady stuff.

-This is an excellent, excellent piece on Edward Norton and how is once-acclaimed performances — which tend to be labored and physically precise — in movies like Primal Fear haven’t aged well.

-In news that will shock absolutely no one who watched the series finale, the producers of Gossip Girl revealed that they hadn’t originally planned to have Dan be the secret society stalker — it was supposed to be Eric or Nate.

–Alex Trebek got choked up when a contestant used his final Jeopardy answer to pay tribute to the host.

-Variety’s Actors on Actors interviews continue, with the latest being between Brad Pitt and Adam Sandler, and Laura Dern and Sterling K Brown.

-Hulu announced that there are no plans for more Veronica Mars and frankly based on how the last season ended, I’m ok with that.

-If you’ve seen Last Christmas, here’s a funny piece on that bananas (but oh so predictable) ending.

-Not surprisingly, Disney+ was a clusterf**k this morning as millions of people tried to download it and log in. I have no idea why they wouldn’t make the app available a few days ago so that everyone could download it and set up their profiles first.

-For those who did get to log in, they seemed to like The Mandalorian, which is getting decent reviews.

-When asked if Werner Herzog felt pressure working with Jon Favreau on The Mandalorian, he replied “I do not know what other films he has made” — which is glorious shade. (To be fair, elsewhere in the interview he praises Favreau’s abilities as a Hollywood power broker.)

-There was also a lot of deleted scenes released on the platform from the Avengers movies, including this scene of Tony with his grown daughter in Endgame.

-I don’t have Disney+ but I would like to watch this holiday movie starring Anna Kendrick and Bill Hader.