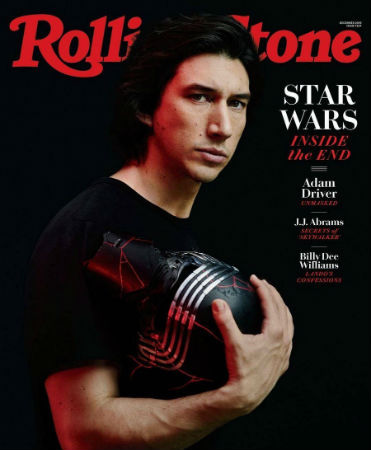 –Adam Driver is on the new cover of Rolling Stone, and yes, this is an acceptable way to start my week.

-The American Music Awards were last night. The red carpet was underwhelming, the shade was surprisingly subtle, and the most creative performance came from Halsey, of all people.  My personal favourite moment was when the camera cut to the audience during Shawn Mendes and Camila Cabello‘s performance, and you could see Jenna Dewan clearly mouth “she’s always so extra.”  (She’s since denied it.)

–Justin Timberlake’s camp is fighting back at rumours that he cheated on Jessica Biel with co-star Alisha Wainwright, with a source saying their like brother and sister. Oh sure, I often hold hands with my brother when I’m not stroking his knee.

-This Kim Kardashian profile is worth reading, if only for the part where Kris Jenner is gifted the bag Kim wanted at her Chanel fashion shoot: “I remember texting my sisters and being like, “Guys, mom is stealing my shiiiine. This is my first fashion shoot! So then the shoot’s over, and [Karl] comes out with something behind his back. And I’m like: “THE BAAAAAG. IT’S HEEEERRE. OH MY GOD.” I’m thinking: I will cherish this forever, and I’m pregnant, so one day I’ll give this bag to my daughter. Then he comes up and he’s like, “Kim, this was the best shoot. Thank you so much. But Kris, here is a bag for you,” and he gives the fucking bag to my mom. And it was a LEGO clutch. They were like ten grand, and you could never get one. And this was all Swarovski crystal with hand stones that was just a sample that never made it to production. So I go into the bathroom and start crying. I was like, Oh my God, she fully stole my life. She stole my whole day today! This was my biggest moment ever in fashion, with Carine, Riccardo, and Karl!”

-The Little Women reviews are really positive, with Variety saying “In terms of sheer logistics, Little Women marks a huge step forward for [Greta] Gerwig, who shows an aptitude for future studio projects without sacrificing her distinctive directorial voice.”

-Kaia Gerber and Pete Davidson are still dating. And he’s still too old for her.

-The new Walking Dead spin-off is called World Beyond, and AMC someone convinced Julia Ormond to be part of it.

-This is terrible: K-pop singer Goo Ha-ra was found dead at her home over the weekend.

-This thread from a music writer who claims Amanda Palmer is obsessed with her is downright terrifying.

–Jason Derulo broke the internet this weekend with this photo.  If he’s trying to redeem his rep after that terrible Cats trailer…it might be working.

-This is No Longer Us: Justin Hartley filed for divorce from his wife after two years of marriage.

-A new clip has been released for Star Wars: The Rise of Skywalker.