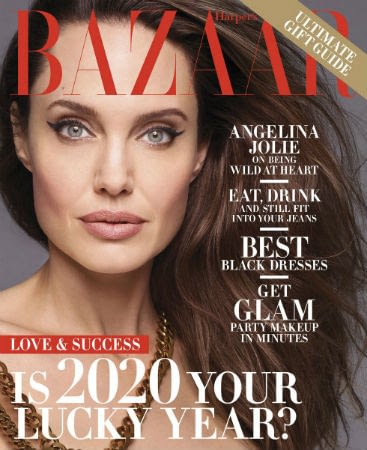 –Angelina Jolie is in the December issue of Harper’s Bazaar and says she’s planning on moving to Africa. “I would love to live abroad and will do so as soon as my children are 18. Right now I’m having to base where their father chooses to live.”

–Emma Watson calls herself “self-partnered” instead of “single,” which sounds kinda dirty and I love it.

-Talking to Howard Stern, Kristen Stewart says she would’ve married Robert Pattinson: “If he proposed, you would’ve gotten married. I’m not a super duper traditionalist, but at the same time…every relationship I’ve ever been in, I thought that was it. I’ve never really been the most casual person.”

–Martin Scorcese wrote a NYT piece on superhero movies and film Twitter has been fighting about it all day. I actually agree with a lot of what he says about the changing business of making movies — media consolidation IS making it harder for smaller and/or diverse films to get theatrical releases. It’s all very similar to Soderbergh’s State of Cinema speech. But he undercuts his argument by taking unnecessary swipes at superhero movies, wading into a tired and snobbish ‘art vs. commerce’ debate. If he stuck to the business/industry side of things, and pointed out how scary Disney is becoming, I bet it would be more widely embraced. I think this thread nails it.

–Colin Farrell is in talks to play Penguin in The Batman, with Andy Serkis up to play Alfred.

–Footage surfaced of ABC’s Amy Robach talking about how she had the Epstein story three years ago, but the lawyers killed it. “The palace found out that we had her whole allegations about Prince Andrew and threatened us a million different ways. We were so afraid that we wouldn’t be able to interview Kate and Will…It was unbelievable what we had. [Bill] Clinton — we had everything.” She later said “I was caught in a private moment of frustration.”

–Saoirse Ronan and Timothee Chalamet are very charming in a new clip from Little Women.

-Here’s the trailer for Netflix’s The Two Popes, starring Jonathan Pryce and Anthony Hopkins. People LOVED this at TIFF.

-We have a new trailer for Netflix’s new anthology series based on the songs of Dolly Parton.