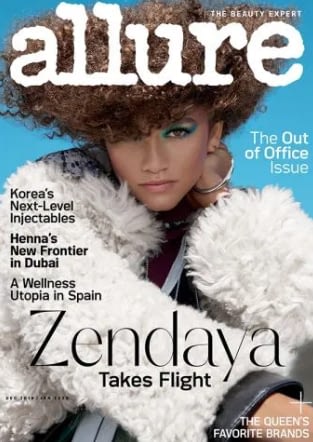 –Zendaya looks amazing per usual on the cover of Allure, where she talks about acting vs making music (“There’s a layer of personal life that I think actors get that music artists don’t. They have no character to hide behind, so they have to be very open. [As actors] we get a little bit of a separation”) and why she stipulated that her Tommy Hillfiger collaboration come in plus sizes (“That was my thing — I’m not going to make clothes my sister or my niece or any of the women in my family can’t wear. A lot of the clothes were for tall people too. For my mom, this is the first time that she can wear pants and not get them altered — she’s six feet four”).

–Harry Styles talks about doing mushrooms while recording his new album. “I think part of the thing with the mushrooms thing for me is that I never do anything when I’m working, and I don’t even drink when I’m working, if I’m touring or anything. I don’t drink really at all. When I was in [One Direction], it was like, to me, it felt like it was so much bigger than any of us that I kind of felt like, ‘I’m not going to be the one who f**ks it up.'”

–Chris Evans says that starring in giant blockbusters hasn’t stopped him from sharing his political views on Twitter. “I did it during Cap, too; it wasn’t like I waited until that run was over. I was doing it while we were filming those movies…I’ve never felt limited or handcuffed by the roles I play or the studios I worked for. I never in my life had a studio tell me to watch what I’m saying.”

-SNL’s musical guest this weekend is King Princess and I cannot wait! (Will Ferrell is the host.)

–Elsa Pataky is defending brother-in-law Liam Hemsworth following his split from Miley Cyrus: “After a relationship that you’ve dedicated ten years to, he’s a little bit down, but he’s coping well. He’s a strong boy and he deserves the best, I think he deserves much better.”

-On Jimmy Kimmel Live!, Billie Eilish spoke to kids about their dreams and got freaked out when a little boy told her that he dreams about Pennywise — who was in the room with them at that moment.

–Nick Carter and his sister Angel have been granted restraining orders against their brother, Aaron.