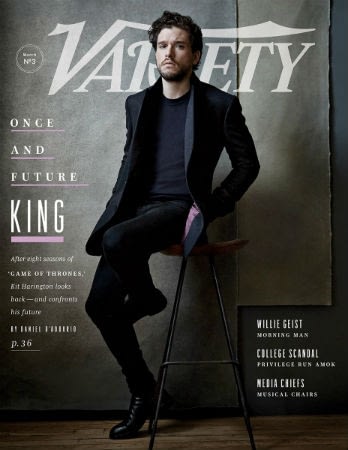 -In his Variety cover story, Kit Harington talks about the finale season of Game of Thrones (“Balls out, I think is the term. [HBO] could have easily set the same budget as they did for season 7, but they went bigger”), his infamous Jon Snow haircut, and how emotional he and his castmates got on their final day of shooting (“I saw [Peter Dinklage] just break down”).

–Nina Dobrev gets her groove back in Shawn Mendes’ new video.

-After a few months of increasingly disturbing reports, Wendy Williams revealed that she’s been living in a sober house: “You know I’ve had a struggle with cocaine in my past. And I never went to a place to get the treatment.”

-We have another bad Once Upon A Time In Hollywood poster, this one featuring Margot Robbie as Sharon Tate.

–Taron Egerton says he and Richard Madden got “blind drunk” before their Carpool Karaoke segment.

–Jason Sudeikis allowed Ellen Degeneres and his wife Olivia Wilde to cut his hair on TV. He shouldn’t have.

-Jesus. After Netflix cancelled One Day at a Time, Sony TV immediately started to shop it around and was approached by CBS All Access — but a clause in Netflix’s contract prevents the show from moving to another streaming service. So not only did they cancel it while at the same time talking about the need for diverse storytelling, they also made it more difficult for the show to live on. Stuff like that, and this article on Netflix’s monoculture machine, have me worried.

-In a show of support for the writers guild, The Wire creator David Simon blasted the practice of agency packaging.

-I haven’t watched Catastrophe’s new season yet, but by all accounts the Carrie Fisher episode is going to kill me.

-CW’s Jane the Virgin spinoff, Jane the Novela, will be an anthology series in which each season is based on a different fictional novel “written by” Jane and narrated by the author herself.

-I can’t even look at these pictures of Lupita Nyong’o. Those eyes! Why???

–Rachel Bilson is returning to her Fox roots in a new show called Lovestruck.

-David Boreanaz is hinting at an Angel reunion … and I don’t hate it?

-Did everyone else cry at the Toy Story 4 trailer, or am I just having a terrible week?