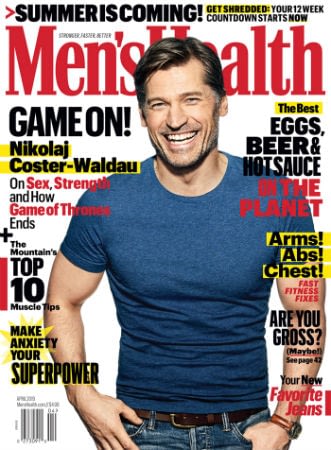 -Game of Thrones’ Nikolaj Coster-Waldau covers the new issue of Men’s Health Magazine and I love how he handles questions about what happens to his character in the final season: don’t evade when you can just make sh*t up. “I can’t tell you anything about that. He grows out his arm. His arm grows back. Yes. It grows back, but not in the way you think. It’s a claw. It comes out as a claw. No — it’s a paw.”

–Samuel L. Jackson covers the new issue of Esquire, and he talks about not caring about pissing off Trump fans by speaking out (“I know how many motherf*ckers hate me. ‘I’m never going to see a Sam Jackson movie again.’ F*ck I care? If you never went to another movie I did in my life, I’m not going to lose any money. I already cashed that check. F*ck you”) and why he has no plans to retire from acting (“It’s not like I’m digging a ditch. I go on set, do some shit. I go back and sit in my trailer for two hours watching TV, eat a sandwich, read. And I go back and do ten more minutes and go sit down some more. So, yeah, it’s a great job.”)

–Felicity Huffman appeared in federal court in Los Angeles this afternoon, after reportedly being arrested at home yesterday for a college entrance scheme by FBI agents with their guns drawn. A judge ordered her released on $250,000 bond. Meanwhile, Lori Loughlin turned herself into the FBI in advance of a court hearing.

-Also Laughlin’s daughter posted a lot of videos that are now coming back to bite her in the ass.

-I very much enjoyed this article on Captain Marvel and the freeing power of not giving a f*ck.

-Is everyone finally starting to believe La Toya Jackson?

-Do you think Lindsay Lohan didn’t realize that Instagram was down for everybody today??

–Keira Knightley can play “Despacito” — on her teeth.

–Nick Jonas got Priyanka Chopra a $200,000 Mercedes. I guess having so many sponsored weddings worked out well for them.

-I’ve pretty much given up on TV these last couple of months, but the next few weeks of premieres is stacking up to be INSANE: Game of Thrones, Killing Eve, Jane the Virgin, What We Do In Shadows, Barry, Legends of Tomorrow, The Bold Type, Fleabag, Catastrophe, The Good Fight, Fosse/Verdon, Chilling Adventures of Sabrina, iZombie, Good Omens. I can already hear my PVR groaning…

-One the I might skip is Netflix’s Turn Up Charlie, which Sepinwall says is less a TV show than a checklist of things Idris Elba wanted to prove he could do on camera.

-Another that sounds skippable is Arrested Development. The second half of season five drops on Netflix this weekend and the reviews are not kind.

-The Good Fight is back tomorrow night and according to reviews it’s still amazing. Too bad no one’s watching it because in the US it’s only available on CBS’ All Access app. (Though if it aired on regular CBS, it probably wouldn’t have lasted this long). I like the idea this writer suggests: CBS air it on sister network Showtime, much like BBC did with AMC once it realized what it had on its hands with Killing Eve.

-Ever trailer I see of Long Shot starring Seth Rogen and Charlize Theron, I get more intrigued. Here’s the red band version.